SEATTLE – Kelsey Plum surpassed Jackie Stiles to become the NCAA’s all-time scoring leader with a career-best 57 points in the final regular season game of her career, leading No. 11 Washington past Utah 84-77 on Saturday.Plum hit 19 of 28 shots... 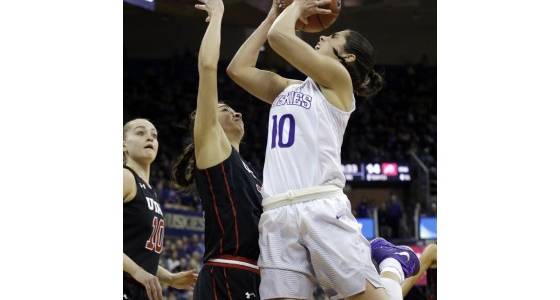 SEATTLE – Kelsey Plum surpassed Jackie Stiles to become the NCAA’s all-time scoring leader with a career-best 57 points in the final regular season game of her career, leading No. 11 Washington past Utah 84-77 on Saturday.

Plum hit 19 of 28 shots and was 13 of 16 at the free-throw line, surpassing Stiles’ mark of 3,393 points midway through the fourth quarter. Plum tied the mark with a hesitation drive and scoop over the outstretched arm of Utah center Emily Potter with 4:57 left in the game. After a Utah basket and a timeout, Plum hit a runner from just outside the lane with 4:06 remaining to move past Stiles on the all-time list. Plum now has 3,397 career points.

The expectation was Plum would likely break the record next week during the Pac-12 tournament. Instead she gave a memorable exclamation to her career at Washington, setting school and Pac-12 single game records as well. She fell three points shy of the NCAA single-game scoring record.

Plum checked out with 44 seconds remaining to a standing ovation from the home crowd as Washington (27-4, 15-3 Pac-12) closed the regular season with seven wins in its final eight games.

Plum gave herself a shot at setting the all-time mark with a big third quarter where she scored 16 points, giving her 38 for the game and needing another 16 in the fourth quarter to pass Stiles. She did more than that, taking over the entire scoring load after Chantel Osahor fouled out early in the fourth quarter. Plum scored 19 of Washington’s 22 points in the final quarter.

Plum was also helped by a tougher than expected effort from Utah. The Utes (16-13, 5-13 Pac-12) stayed close throughout, pulling within three early in the second half and staying close enough in the fourth quarter that Washington needed all of Plum’s points. Paige Crozon led Utah with 22 points and Tanaeya Boclair added 15.

Osahor added 14 points prior to fouling out and added 11 rebounds for her NCAA leading 26th double-double of the season.