Famagusta 11°
clear sky
BUSINESS EDUCATION ENTERTAINMENT HEALTH POLITICS SCIENCE SPORTS TECHNOLOGY
10:22 Four Benefits of Hiring a Dedicated Development Team
04:48 Mark Kelly, President of Safety Marking Inc., Discusses Structuring Effective...
17:58 Trump wants to play golf at the Biden swearing-in in Scotland - but is...
17:54 First doubts Regarding tightened Steps: two National Countries Extract...
10:39 Covid-19 : in France, the end of containment and entry into force of the...
04:34 The schools of Rome will use the Internet with light bulbs: what it is...
10:58 Kratom Tea: How Is It?
11:46 Office Furniture Products for you!
12:17 Top Clubs, Their Value, Revenue And Current Standings
11:14 Reasons Why Rewarding Yourself is a Good Practice
BIST
1524
GOLD
439.288
USD
7.4448
GPB
10.1627
EUR
9.0064
Breaking News
Why Do We Prefer to Game on Our Smartphones?
Close

UCLA survives a scare, not a potential loss to ASU but a possible injury to Lonzo Ball

It was the only kind of call UCLA never wanted Lonzo Ball to have to make.The freshman point guard raised his right hand and waved toward the bench late in the first half Thursday night at Wells Fargo Arena after hobbling around the court for about a minute.... 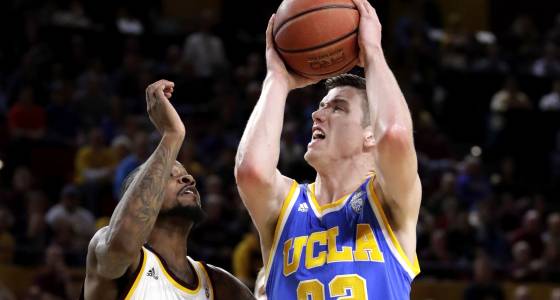 It was the only kind of call UCLA never wanted Lonzo Ball to have to make.

The freshman point guard raised his right hand and waved toward the bench late in the first half Thursday night at Wells Fargo Arena after hobbling around the court for about a minute. He needed to come out of the game.

A fan base and a prominent alumnus feared the worst as Ball grabbed his right ankle before limping toward the locker room.

Someone appeared to be watching over Ball, who returned before halftime and was able to take a back seat to UCLA’s big men during the fifth-ranked Bruins’ 87-75 victory over Arizona State.

Forward TJ Leaf overpowered every dinky defender the Sun Devils put in his way, scoring 25 points on 11-for-16 shooting to go with nine rebounds as part of a dominant frontcourt effort for the Bruins. UCLA center Ike Anigbogu added a career-high 12 points and six rebounds off the bench while carrying out Coach Steve Alford’s game plan of pounding it inside against a team that played no one taller than 6 feet 8.

“We knew they were kind of weak in the interior,” Anigbogu said, “so Coach told us to go at them.”

That the Bruins did, scoring 50 points in the paint and amassing a 49-30 advantage in the rebounding department on the way to improving to 6-0 in February. The last UCLA team to go unbeaten in February went on to win the 1995 national championship.

“We know February sets up March and that’s one of the big things we’ve been harping on,” Leaf said, “so we just want to be playing our best ball come March.”

UCLA (25-3 overall, 12-3 Pac-12 Conference) is trending upward largely because of its improved defense, which has given up an average of 71.5 points during its six-game winning streak. The Bruins effectively mixed zone and man-to-man defenses against the Sun Devils, giving up 14 three-pointers but holding the Sun Devils to 38.8% shooting overall.

Alford seemed pleased all the way around with his team, walking into the locker room and announcing, “Hey, great job” before the door closed. The Bruins also received solid contributions from Aaron Holiday, who collected 17 points and six assists off the bench, and Bryce Alford, who had 15 points and six assists.

Arizona State tried to fluster UCLA with its famed Curtain of Distraction in the second half, unfurling scantily clad male cheerleaders, a costumed bear dueling a knight and even a student waving Sun Devils alumnus James Harden’s signature sneakers. It hardly mattered as the Bruins made 10 of 12 free throws during that stretch.

“There’s no Curtain of Distraction,” Leaf deadpanned after making all three of his attempts from the foul line in the second half.

Ball didn’t remain in the locker room long after tweaking his ankle and getting it re-taped, checking back into the game with 68 seconds left in the first half. He threw an alley-oop pass that sailed out of bounds on the Bruins’ next possession and was still walking a bit gingerly before the second half but announced he was OK when he leaped to dunk a lob from Holiday soon thereafter.

Ball finished with 11 rebounds, five assists, four points and three turnovers in 33 minutes. Ankles often feel worse the day after they’re injured, but Steve Alford said he expected Ball to be fine for the Bruins’ showdown against No. 4 Arizona on Saturday.