PORT ST. LUCIE — The jig is up, so you can turn down the outrage.Less than six months ago, Tim Tebow stood on Dedeaux Field in Los Angeles, having just showcased his ballplaying abilities to officials from 28 teams, and said he strived to have “a career... 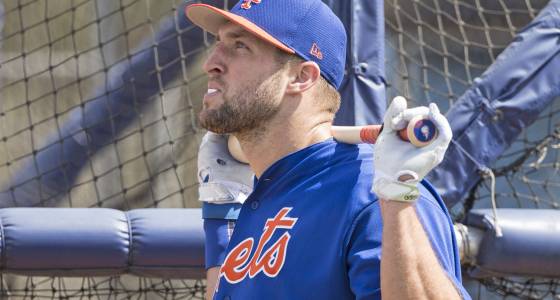 PORT ST. LUCIE — The jig is up, so you can turn down the outrage.

Less than six months ago, Tim Tebow stood on Dedeaux Field in Los Angeles, having just showcased his ballplaying abilities to officials from 28 teams, and said he strived to have “a career in the big leagues.”

On Tuesday at First Data Field, right before he began his first spring training, the quarterback-turned-outfielder retreated from that aggressive ambition. Asked about making it to the big leagues for a day, forget about having a career there, the 29-year-old said: “That’s not just the ultimate goal. The ultimate goal is to be able enjoy it every day, and I can honestly sit here before every one of you and I can honestly say I’ve had so much fun training, pursuing it, getting hits, striking out, whatever it’s been.”

Alrighty then. With that proclamation, Tebow becomes a much more athletic Garth Brooks. And we get liberated to treat the former Jet as the professional curiosity he is and not discuss him in the context of the Mets’ championship aspirations.

There’s nothing wrong with this mutually beneficial relationship. Tebow gets to add “professional baseball player” to his “About the Author” write-up in his future books and open up new revenue paths for his myriad charitable ventures. And the Mets boost their brand with the remarkable number of people who support Tebow. While the crowd Tuesday was light, with no more than 30 people quietly watching his workout and enthusiastically securing autographs and selfies upon the session’s conclusion, you can expect ticket sales to go swiftly this season as Tebow most likely gets assigned to Class-A St. Lucie.

Tebow takes the roster spot of someone who carries no agenda besides wanting to play baseball? Not buying it. Any worthwhile young player will cruise by Tebow as if he’s a golf cart on a highway. And fair or not, Tebow’s popularity can’t be dismissed from the equation.

Those on site Monday saw Tebow rip nine home runs during his four rounds of batting practice, covering about 40 swings. The man has power, undoubtedly. He can turn on a BP fastball better, probably, than any other Heisman Trophy winner besides Bo Jackson. Yet his time in the Arizona Fall League (.194/.296/.242 in 70 plate appearances) displayed the difficulty in carrying over that raw power into game situations.

The more telling moment might have been during the news conference, when I asked him how comfortable he was with the idea of the Mets selling his “Tebow 15” shirsey (for $28 plus tax) at a stand outside the ballpark and not having one of 293-home-run-hitting, Roberto Clemente-Award-winning Curtis Granderson available.

Tebow replied, “I don’t really pay attention to it. … I focus on what I can control, my effort, my attitude, my focus. Trying to get better every single day. I’m not going to worry about what everyone’s writing or what everybody is thinking or however I’m being marketed. For me, I just want to be able to continue the process, enjoy the process, enjoy every day, get to know my teammates and have fun out there.”

If Tebow’s sole priority was to make the major leagues as opposed to also doing his thing, Tebow would have expressed discomfort over the T-shirt situation rather than washing his hands of it. He has spent enough time in sports environments to appreciate the importance of service time and the respect it merits.

Nevertheless, I’ve spoken with a handful of baseball people who have interacted extensively with Tebow and have come away really liking him. They admire his work ethic and positive nature and don’t mind the carnival element that accompanies him. That tolerance will get a test when the Mets play him in a Grapefruit League game this spring and the veteran players receive a full dosage of Tebowmania.

So let’s enjoy each day of Tebow’s Mets stay, just like the man himself, while it lasts. As long as we acknowledge it as the sideshow, it won’t impact our viewing of the main event.