The case for and against Dalton Sturm having a breakthrough 2017

CaptionCloseUTSA will return for spring practice next week coming off the heels of last season's improbable bowl trip.The return also will place quarterback Dalton Sturm in an unaccustomed position for the start of the 2017 season as the team's starter. Sturm... 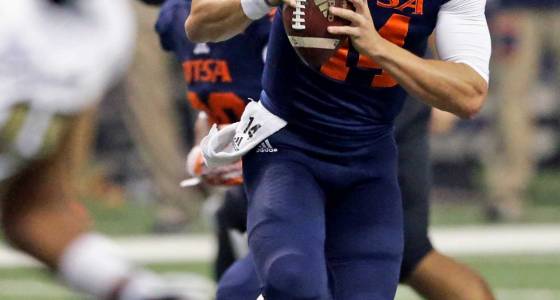 UTSA will return for spring practice next week coming off the heels of last season's improbable bowl trip.

The return also will place quarterback Dalton Sturm in an unaccustomed position for the start of the 2017 season as the team's starter.

Sturm improved in virtually every statistical category last season as he won the starting job in training camp and was able to keep it for most of the season.

Jared Johnson got some meaningful playing time during the latter stages of the season, but Sturm started every game and played the entire New Mexico Bowl.

Johnson has graduated, leaving Sturm as the unquestioned starter for the Roadrunners heading into spring practice.

The website the SWCRoundup.com published an interesting analysis of Sturm's 2016 season.

It mentions that Sturm bettered his statistics in every category last season. His interceptions were down, his yards per pass completion and attempt almost doubled and his sack avoidance was better than before.

But it does bring into context a couple of troubling trends as the season continued. The article points out that Sturm's completion percentage dropped to 50 percent over the final seven games of the season. A couple of notable reasons helped play a part in that as the Roadrunners never could depend on one receiver as a breakout performer as the season continued and there was little use of the tight end as a possession receiver.

Sturm also passed for more than 250 yards against an FBS opponent only once last season.

The Roadrunners' Conference USA title hopes will depend on Sturm taking another jump in his senior season. Most of his offensive weapons are back except for leading rusher Jarveon Williams. The Roadrunners will have virtually every key member of the receiving corps back, along with a couple of notable recruits who should play immediately. The offensive line returns three starters.

It should be the most talented returning roster in school history. It will be Sturm's second year in working with veteran offensive coordinator Frank Scelfo.

Sturm's development will be the biggest key for the Roadrunners' hopes in 2017. More improvement like he showed last season could catapult UTSA into contention for the school's first conference championship.