Stroll spins out of second consecutive day of testing

BARCELONA, Spain -- Eighteen-year-old rookie Lance Stroll suffered another setback on his first week of testing for Williams after crashing out for a second day in a row.Stroll had a shortened first day at the wheel on Tuesday when an innocuous-looking spin... 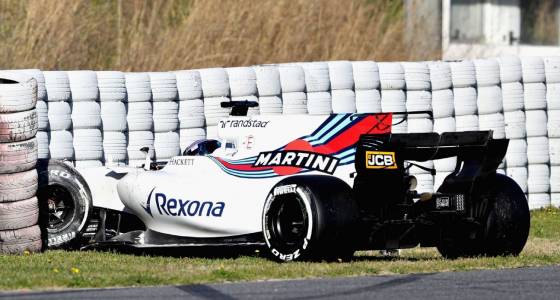 BARCELONA, Spain -- Eighteen-year-old rookie Lance Stroll suffered another setback on his first week of testing for Williams after crashing out for a second day in a row.

Stroll had a shortened first day at the wheel on Tuesday when an innocuous-looking spin forced Williams to make repairs, which ended his day prematurely. He was looking to make up time on Wednesday and, despite a spin just before the hour-long lunch break, looked to be ticking nicely towards a century of laps.

However, while on his 99th late in the afternoon, Stroll spun out and hit the wall coming down the hill at Turn 5. The spin damaged the front end of the car and his left suspension, forcing Williams to abandon their plans for the final hour and a half of the day.

Stroll won European Formula 3 last season and joined Williams after his billionaire father Lawrence bankrolled a series of private tests at existing F1 circuits to ready his son for a debut in 2017. The teenager is set to be the first Canadian to appear in an F1 race since former world champion Jacques Villeneuve drove at the 2006 German Grand Prix.