Location isn’t just critical in real estate. It makes all the difference in basketball — at least for St. John’s.The Johnnies are a different team at home, better defensively, more resilient, capable of taking a punch, and delivering one right... 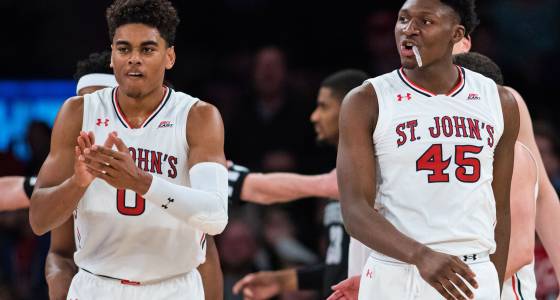 Location isn’t just critical in real estate. It makes all the difference in basketball — at least for St. John’s.

The Johnnies are a different team at home, better defensively, more resilient, capable of taking a punch, and delivering one right back. The latest example came Saturday, when Chris Mullin’s team found a way to finally beat Georgetown, despite clearly not being at its best.

St. John’s won at home for the third straight time, beating the Hoyas for the first time in the Mullin era, 86-80, to snap a two-game losing streak and improve to 5-3 in Big East play at home. The Big East Tournament just happens to be back at the Garden, where St. John’s has carved out a strong home-court advantage.

As has often been the case in the Red Storm’s victories, freshman Shamorie Ponds led the way, slicing up the Hoyas to the tune of 24 points on just 15 shots, taking and making big shots when needed. His two free throws with 54.7 seconds left halted Georgetown’s 7-0 run, paving the way to victory. Marcus LoVett Jr. added four clutch free throws to ice it.

Other Johnnies stepped up, too. Federico Mussini had arguably his best game of the year, keying a 17-0 first-half run, and scoring 16 points, and junior Bashir Ahmed added 16 points and five rebounds.

The opening 20 minutes were about as strange as college basketball gets, each team mounting a 17-0 run when the other looked discombobulated, disinterested and out of sorts. Georgetown shot 55 percent from the field and committed 15 turnovers, repeatedly shooting itself in the foot. And, yet, despite trailing by 14 at one point, the Hoyas led by one at halftime.

St. John’s (13-16, 7-9 Big East), on the other hand, was out-rebounded, 19-11, and continued to struggle on the defensive end, offering little resistance when the Hoyas took care of the ball. But the hot shooting of Mussini and Ponds, who each scored 11 first-half points, kept the Johnnies afloat despite their uneven play.

They started the second half strong, ripping off a 13-5 run to take a seven-point lead, and never trailed again. Georgetown (14-15, 5-11) got as close as one on multiple occasions, but the Johnnies always had an answer, a mini-spurt to create breathing room.