Famagusta 26°
clear sky
BUSINESS EDUCATION ENTERTAINMENT HEALTH POLITICS SCIENCE SPORTS TECHNOLOGY
03:35 US and Haiti demand release of 17 missionaries kidnapped by gang
16:24 It's risky business: Some Capitol Riot defendants give up lawyers
16:21 Kidnapping missionaries are being blamed on gangs with abducted past members
04:08 Officials label the fatal stabbing of a UK lawmaker terrorist act
00:00 The recalculation of unemployment benefit goes back to the Council of...
16:26 Jan. 6 panel sets vote on contempt charges against Bannon
00:00 Already survivor of a crash, an American fisherman survives after being...
13:59 As inflation rises, Social Security benefits get a big boost
10:53 Next FDA agenda: J&J and Moderna booster shots
15:52 Partially reaffirmed: Pro-Iran parties lose the election in Iraq
BIST
1429.85
GOLD
531.31
USD
9.3166
GPB
12.8714
EUR
10.8583
Breaking News
A study shows that at 30 km/h we pollute more than at 50 km/h: Xavier Bertrand's misinterpretation
Close

Spurs Where Are They Now? Louie Dampier

CaptionCloseThey called him “Little Louie,” a nickname he earned in high school because of his frail build.At 6-foot, 170 pounds, Louie Dampier wasn’t going to intimidate anyone. But there was never anything small about Dampier’s skills... 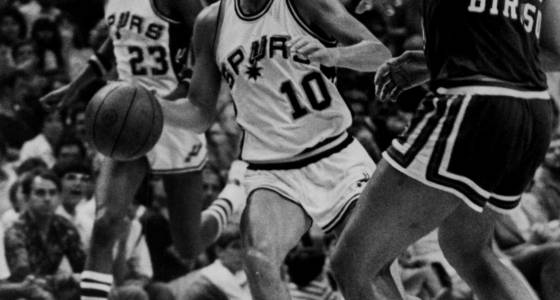 They called him “Little Louie,” a nickname he earned in high school because of his frail build.

At 6-foot, 170 pounds, Louie Dampier wasn’t going to intimidate anyone. But there was never anything small about Dampier’s skills on a basketball court.

At Southport High School in Indianapolis, at the University of Kentucky under legendary coach Adolph Rupp, and throughout his ABA and NBA career with the Kentucky Colonels and the Spurs, Dampier had a game, at least offensively, that was 10-feet tall.

“He could really shoot the lights out, man,” said George “Iceman” Gervin, his teammate for three seasons in San Antonio.

The numbers tell the story. In his 12 seasons as a professional, Dampier scored 15,279 points, with a good many of those coming on a jump shot as sweet as any basketball has ever seen.

Go to ExpressNews.com to read more about Little Louie's time with the Spurs.