Even one of the most dominating players in NBA history takes orders from his mom. Shaquille O’Neal’s war of words with Golden State Warriors center JaVale McGee appears to be over, and it sounds like the peacemaker was Shaq’s mom.“Just say Shaq’s... 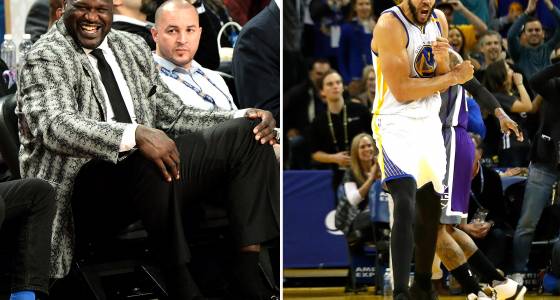 Even one of the most dominating players in NBA history takes orders from his mom. Shaquille O’Neal’s war of words with Golden State Warriors center JaVale McGee appears to be over, and it sounds like the peacemaker was Shaq’s mom.

“Just say Shaq’s mom called him, told him, ‘Stop this silliness. Leave him alone.’ So that’s the end of the beef,” O’Neal told The Undefeated. “You won’t be hearing about it from my side anymore. Mama has spoken.”

The feud blew up last week, when O’Neal yet again made McGee the focus of his popular TNT blooper reel “Shaqtin’ The Fool.” McGee and Shaq went back and forth on Twitter, and some of McGee’s teammates – including Kevin Durant – and Warriors coach Steve Kerr stood up for the backup center. The Warriors reportedly asked TNT to address the situation with O’Neal.

But it looks like all that was needed was O’Neal’s no-nonsense mom – Lucille O’Neal – to intervene.

“It’s not funny anymore, seeing the things they’re saying to each other,” Lucille said. “They need to squash this and move on.”

McGee’s mom is not as convinced, though.

“He cyberbullied my son,” Pamela McGee told The Undefeated in what was described as an emotional 30-minute conversation. “Totally inappropriate. Shaquille needs to lose his job or be suspended. The NBA needs to make a stand …

“If you really want to get technical with it, it’s bullying. We all have little jokes and stuff. But when you continue to pick on just one person – as his career is resurrecting – there’s nothing to it but bullying. And it’s unacceptable. You can’t allow someone to continue to do this who represents TNT and the NBA. He is a representative of TNT and the NBA. Broadcasters are held to a higher authority. He should lose his job.”