As the Colorado football team has struggled on the field in recent years, the NFL hasn't paid much attention to the Buffaloes.That's changing as the 2017 NFL draft approaches, however.After having no players drafted in the past two years, CU could have... 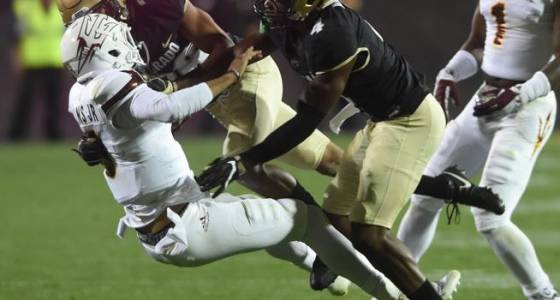 As the Colorado football team has struggled on the field in recent years, the NFL hasn't paid much attention to the Buffaloes.

That's changing as the 2017 NFL draft approaches, however.

After having no players drafted in the past two years, CU could have several players selected when the NFL gathers for its annual draft from April 27-29.

BuffZone.com recently caught up with Cecil Lammey, an NFL Insider for 104.3 The Fan in Denver, to get his thoughts on the Buffs' prospects. Lammey has studied draft prospects for years, and NFL teams will often use him as a scouting consultant.

On Tuesday, the NFL scouting combine will begin in Indianapolis, with four Buffs — quarterback Sefo Liufau, cornerbacks Chidobe Awuzie and Akhello Witherspoon and safety Tedric Thompson — all invited to attend.

Those four, along with defensive tackle Josh Tupou, outside linebacker Jimmie Gilbert and possibly center Alex Kelley, could hear their named called in April.

A look at the Buffs' pro prospects:

CB Chidobe Awuzie: Arguably the best player on CU's roster last season, he's also likely to be the first CU player selected in the April draft. Most draft experts project Awuzie to go on the second day, which features the second and third rounds.

Unable to play in the Senior Bowl because of a turf toe injury — which also hampered him in CU's 38-8 loss to Oklahoma State in the Valero Alamo Bowl — Awuzie likely needs to show well in workouts to get into the second round.

"The combine and pro day will be huge for him because he didn't get the Senior Bowl," Lammey said. "But, scouts have a high opinion on him."

Scouts like Awuzie's instincts and his ability to cover receivers short or deep.

"He's clearly the best prospect from CU, in my opinion," Lammey said.

LB Jimmie Gilbert: CU's top pass rusher last year, with 10.5 sacks, Gilbert is an intriguing prospect. At 6-foot-4, 223 pounds, he's lanky, but has the ability to add weight, Lammey said. That's a good sign to scouts, who see him as seventh-round pick or a priority free agent.

QB Sefo Liufau: The all-time leading passer in CU history, Liufau had his ups and downs as a player. To some, it's a bit surprising that he was invited to the Senior Bowl and the combine, given that he doesn't appear to be a top prospect.

"It's a bit surprising that Liufau is going to the combine, based on his Senior Bowl performance, which wasn't good," Lammey said.

Liufau's strengths at CU, however, were his leadership and toughness — two qualities that scouts love. Liufau doesn't have a strong arm and doesn't possess the accuracy or instincts of a top quarterback, but Lammey still believes Liufau could be a late-round pick or priority free agent.

"You root for a guy like that, and certainly he has a great head on his shoulders, but at the end, you know you're getting a third-string guy, a camp arm," Lammey said. "I don't think he's going to be drafted, but I could see him getting a camp invite and impressing so much that maybe he earns a spot on a practice squad this year.

"I could see him playing 5-7 years as a backup, probably never seeing the field; probably the type of guy you don't want to see the field, but again with that leadership, he's the type of guy that you want in your building."

S Tedric Thompson: Last year, Thompson led the country in pass-breakups and picked off seven passes. He could go anywhere from the middle to late rounds.

"To me, his biggest highlight is his football intelligence," said Lammey, who compared Thompson to Broncos' safety Darian Stewart. "It's his ability to read and react."

Having a brother in the NFL — Cedric Thompson is a safety for the Minnesota Vikings — won't hurt, as he will know what to expect in going through the process. Even without those NFL bloodlines, Thompson appears to have the goods to get selected.

Thompson may bite on play fakes, Lammey said, but added, "He's still super aggressive, but also plays with that edge that you like to see."

DL Josh Tupou: It was surprise that Tupou, who dominated at nose tackle for CU last season, didn't get an invitation to the combine. Tupou was impressive at the Shrine Game in January, but at 6-foot-3, 362 pounds, showed up 17 pounds heavier than his listed weight.

"I know a lot of people were surprised by that number," Lammey said.

Despite the extra weight, Tupou moved well at the Shrine Game. Still, CU's pro day on March 8 might be huge for Tupou, who could be a late-round pick if he's in good shape.

"If he's in the 350-range instead of 362, I think scouts will respond positively to that," Lammey said. "You have to show the scouting community and the NFL world that you're ready to be a professional, to take your physique seriously. It can cost a guy like Tupou, who is a late-round guy. If he doesn't show that, he'll be undrafted.

"If you want to get that draft selection next to your name, you do what it takes to show the scouting world that you're serious about the preparation."

CB Ahkello Witherspoon: Behind Awuzie, he might be the second Buff drafted in April. At 6-foot-3, he's got length and athleticism that impresses scouts, and many project him to go in the middle of the draft.

"His understanding of the route tree is improving as his career has continued and people that I've talked to believe that will also continue as he becomes a pro," Lammey said. "From the scouting angle, he's only going to get better and better."

Witherspoon is projected by some as a fourth-round pick, but could improve his stock with a great combine.

Outside of those six players, CU has a few other draft hopefuls, including Kelley. A three-year starter at center, Kelley was not considered an elite lineman in college, but could get a look from the NFL.

"I still don't think he gets drafted, but there's not many good offensive linemen coming out," Lammey said. "Anybody up front on the offensive line may get a look."

That group will need to perform well at CU's pro day and hope to impress a scout in the NFL or maybe even the Canadian Football League.

For CU, it's good news that so many of its seniors will get looks from pro scouts, and it may be just the start. After a resurgent, 10-4 season last fall, the Buffs are hoping to keep it going next year. Scouts are sure to be watching.

"This program is back on the right path and they're certainly going to have a lot of eyes on them this next year," Lammey said. "It'll be fun to watch and see who emerges as draft-relevant next year."