Russell Westbrook again the best performer in a leading role

Oklahoma City Thunder guard Russell Westbrook's pursuit of an Oscar remains ongoing.With 41 points, 11 rebounds and 11 assists in a win over the Pelicans on Sunday, Westbrook now has 29 triple-doubles, putting him on pace for 40, one shy of Oscar Robertson’s... 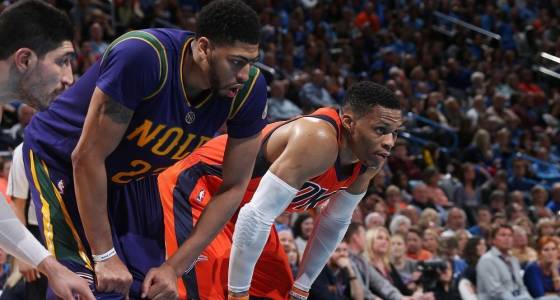 With 41 points, 11 rebounds and 11 assists in a win over the Pelicans on Sunday, Westbrook now has 29 triple-doubles, putting him on pace for 40, one shy of Oscar Robertson’s single-season record (set in 1961-62).

What made this game unique was Westbrook’s 21-point fourth quarter, the most points he has scored in the fourth quarter of a game in his career.

Elias notes that there have been six games this season in which a player scored his team’s final 15 (or more) points. Westbrook has three of them.

The Thunder are now 23-6 when Westbrook records a triple-double this season. They are 11-19 when he doesn’t.

What happened to Anthony Davis?

Anthony Davis’ 24 points in the first quarter were the most he has scored in any quarter. But he was held to 16 points on 6-of-16 shooting the rest of the way (he was 4-of-13 on contested shots). Davis was 4-of-13 shooting when defended by either Steven Adams or Taj Gibson, 11-of-15 when guarded by others.