Rockets, Timberwolves put up some crazy numbers in Houston victory

HOUSTON -- Karl-Anthony Towns was so frustrated Saturday night after his Minnesota Timberwolves lost 142-130 to the Houston Rockets, he went to an upstairs weight room to work out some frustration.“Very rarely [lift weights after a game], but today... 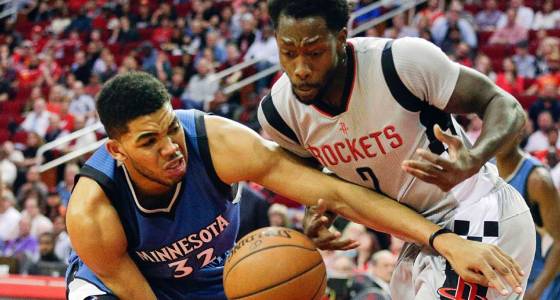 HOUSTON -- Karl-Anthony Towns was so frustrated Saturday night after his Minnesota Timberwolves lost 142-130 to the Houston Rockets, he went to an upstairs weight room to work out some frustration.

“Very rarely [lift weights after a game], but today I was a little extra mad,” Towns said. “I wanted to come out with a W and we didn’t and I took out some of my frustration to get my body right.”

Towns was fantastic as he scored 37 points and grabbed a career-high 22 rebounds. Combined with Andrew Wiggins, the two young stars scored 67 points on 46 shots.

Should be enough to win, right?

How do you score 130 points in an NBA game and lose? Well the Rockets attempted 94 total shots, 58 from 3-point range. The Wolves didn’t help matters with a season-high 23 turnovers, leading to 38 points for the Rockets.

Saturday night was a wild night at the Toyota Center. It made you remember what the ABA -- that league with the red, white and blue basketball -- used to be.

"What, you know about the ABA?" Rockets coach Mike D'Antoni asked.

This is how weird, wild, strange this game was:

The Rockets set season-highs in points scored and allowed.

Houston also made 22 3-pointers, marking the eighth time this season they’ve made at least 20 3s, which is a NBA single-season record.

The teams combined for 188 shot attempts.

There were 14 players who scored in double-figures.

The only starter not to score in double-figures was Brandon Rush, and he played 33 minutes.

Minnesota set season-highs in total points for the game and second half (72).

“We share the ball and we found the open man,” Rockets forward Ryan Anderson said after scoring 18 points. “We trust each other on this team. We know that sometimes you want to give up a better shot for an even better shot. We trust the next guy to make the right play or make the shot. I think it’s going to go in every time I pass it to somebody else. I hope they feel the same way. It’s good basketball that way.”

Rockets guard Eric Gordon, who scored 14 points off the bench, learned basketball from his father when growing up in Indiana. Eric Gordon Sr. was a star player at North Central High School in Indianapolis and at Liberty University in Lynchburg, Virginia.

“He just thinks it’s crazy we’re scoring this many points, even on nights that we’re not feeling it,” Gordon said of his father. “It’s nothing new. With Lou Williams here, it’s going to happen all the time.”

The new Rockets’ guard followed up his 27-point night in New Orleans with 17 against the Wolves. Williams is fitting right in with the Rockets' wide-open offense.

“You know what? It’s not very complicated to play here,” Williams said. “We have a very open system. We have a lot of guys that have very high basketball IQs and they just go out there and play. It is a very veteran group of guys, so it hasn’t been that difficult for me.”

This wide-open game probably had Wolves coach Tom Thibodeau cringing at the lack of defense. There were a few calls that didn’t go his way; he thought Wiggins was fouled by Trevor Ariza late in the game as he swiped the ball out of his hands.

“We have to win,” Thibodeau said. “You score 130 and that’s plenty of points and the rebounding (a 58-31 Wolves edge) was really good. Turnovers got us.”

Yeah, they did, but, the Wolves were outscored 76-72 in the second half.

“There is a shift in scoring going up,” Thibodeau said. “The teams that win big in the playoffs, play strong on both sides of the ball. Houston is obviously an elite team and has had a terrific season. You have to play well for 48 minutes against them.”