PORT CHARLOTTE — Jose Molina made a big impression during his three years with the Rays, often for his hefty weight and light batting average. 5 Days Ago23 Hours Ago1 Week AgoBut Molina was known for his mastery of receiving and framing pitches, and RHP... 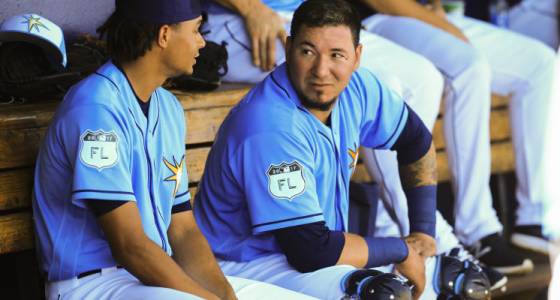 PORT CHARLOTTE — Jose Molina made a big impression during his three years with the Rays, often for his hefty weight and light batting average.

But Molina was known for his mastery of receiving and framing pitches, and RHP Chris Archer invoked his name Sunday after his first experience throwing to recently acquired C Jesus Sucre.

"I like a lot of things Sucre can do," Archer said. "I like him a lot. … I've been telling everybody this, it's like throwing to a younger, slimmer Jose Molina with the actions of the hands. And his ability to throw, it's up there."

Sucre, 28, showed off that arm as well Sunday, catching Boston's Brock Holt stealing and foiling Jackie Bradley's attempt to bunt for a hit, and he singled in a run after homering Saturday.

Given his strong defense, Sucre (pronounced SUE-cray), acquired just before camp from Seattle for whom he played parts of the past four seasons in the minors, could be an interesting factor in the early season catching plans, competing for now with Luke Maile to share time with Curt Casali.

"That's what I'm here for," Sucre said, "trying to make it, trying to get back to the show."

It's a kids' game

Coming off a solid first pro season at the Class A level, Joe McCarthy showed up Monday to join the other early reporting minor-leaguers for workouts.

But with several Rays outfielders being held back as they recover from injury, McCarthy and Justin Williams, who finished 2016 at Double A, found themselves unexpectedly in Sunday's lineup.

Williams struck out twice, but McCarthy, a 2015 fifth-round pick from Virginia, hit an RBI double, a two-run homer and drew two walks.

"Wow," Rays manager Kevin Cash said. "Probably not the most ideal situation to run him out there for nine innings, but he made the most of it."

Said McCarthy: "You want to do well. Going into it you're anxious, you're nervous. … So I just told myself, 'Hey, just play hard, it's baseball. Have fun.' And I did."

RHP Chris Archer was pleased with his spring debut, focusing on fastball command during his 28-pitch (15-strike) outing over two innings, allowing a leadoff single (erased on a caught stealing) and a two-out walk in the second. "I accomplished what I wanted to accomplish," he said. "This early in spring training it's all about getting fastball command — in, out, up, down, everywhere." Archer will pitch again for the Rays on Saturday, then join Team USA to start the March 10 WBC opener.

Something to think about

Could there be a new Red Sox curse in all this? A foul ball by Rays OF Johnny Field went over the stands and hit and broke the glass on a photo of Ted Williams being sold at the stadium by the staff of the Trop-based museum honoring the Boston legend.

RHP Chase Whitley, who returned last September from Tommy John surgery, had two sharp innings. … C Luke Maile showed well in hustling to beat out an infield hit, allowing the third run to score. … 1B Rickie Weeks looked smooth again at his new position and showed his old power with a homer to left.

Number of the day

2.550 OPS for INF Tim Beckham after following Friday's double-triple game with a double and a walk Sunday.

> OF Corey Dickerson, INF/OF Nick Franklin and LHP Blake Snell are the biggest names making the trip to Clearwater today.

> OF Steven Souza Jr. said his surgically repaired left hip has felt good with each challenge, and he expects to make his spring debut Wednesday.

Marc Topkin can be reached at mtopkin@tampabay.com. Follow @TBTimes_Rays.