With just six weeks remaining in the regular season and the trade deadline behind us, there's still no question we'll see an NBA Finals rubber match between the Cleveland Cavaliers and Golden State Warriors, correct? Well, most likely, with both the Cavaliers... 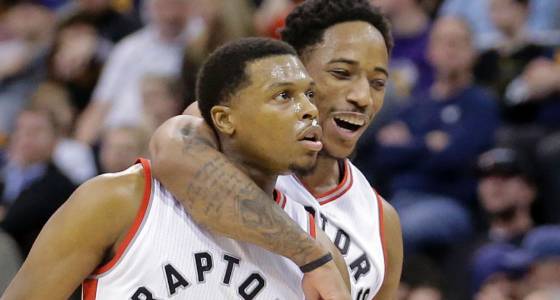 With just six weeks remaining in the regular season and the trade deadline behind us, there's still no question we'll see an NBA Finals rubber match between the Cleveland Cavaliers and Golden State Warriors, correct? Well, most likely, with both the Cavaliers and Warriors an overwhelming 1-5 favorite to win their respective conferences. The high-powered Warriors remain the prohibitive title favorites at -220, followed by the Cavaliers at +250 and the San Antonio Spurs next at +800. (All future book odds provided by the Westgate Las Vegas Superbook) However, here are a couple teams that could potentially crash the NBA Finals party in June.

The Raptors faltered in the Eastern Conference Finals last season to the Cavaliers, with all four of their losses coming in decisive fashion. Have the Raptors closed the gap? The answer is yes, and their playoff experience from last season can pay dividends as well.

Toronto has featured a high-powered offense all season, led by the continually improving DeMar DeRozan. The hard work DeRozan put in during the offseason was apparent from the start of the season, as he's increased his scoring by 4.2 points more per game.

Point guard Kyle Lowry remains the straw that stirs the drink for the Raptors, and the gamer is capable of raising his game in the postseason. Importantly, Lowry is shooting a career high 41.7 percent from beyond the arc, after his shooting wavered in recent postseasons.

It's defense that holds the key to any spring success for Toronto. Currently, the Raptors rate 17th in defensive efficiency, and progress must be shown there. That said, the Raptors focused on improving their defense at the deadline via the addition of Serge Ibaka and P.J. Tucker. The Raptors now own a strong handful of plus defenders. With six weeks to incorporate their new personnel, this team will have a chance to peak in the playoffs on the defensive end. The Raptors are the second-best team in the Eastern Conference, which they've showed by largely handling the Boston Celtics and Washington Wizards this season. No question, knocking off the mightily favored Cavaliers would prove a more daunting task, but the Raptors are more capable in 2017 than they were last season.

For a team that's won a combined 112 games in its last 140 regular season games, the Spurs continue to fall slightly under the radar, while being impossible to dismiss. They might be missing the 'wow' factor that the mighty Warriors possess, but in their opening-night 129-100 demolition of Golden State the Spurs showed their worth (the Spurs and Warriors face off again March 11).

The Spurs don't own the high-octane offense of their peers, but do possess the NBA's top-ranked defense and two-way stalwart Kawhi Leonard. They've faltered the two past postseasons, but still own the plethora of experience that vaulted them to the title in 2014.

While the 3-point shot and small ball are ruling the current NBA, it might be the Spurs' size and length that prove the ultimate factor. The Warriors can still be vulnerable at their defensive rim this season.

San Antonio is arguably the second-best team in the NBA, and if they could find a way to extinguish the Warriors they'd present an outstanding opportunity to win the title.