Charles Oakley, still at odds with the New York Knicks, watched his former team in his hometown Thursday night.Oakley, a Cleveland native, sat next to Cavaliers owner Dan Gilbert as the Knicks fell to the defending NBA champions 119-104. He said he was rooting... 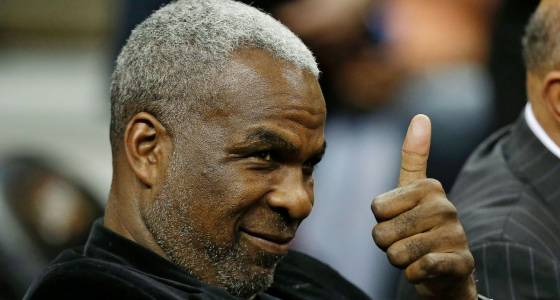 Charles Oakley, still at odds with the New York Knicks, watched his former team in his hometown Thursday night.

Oakley, a Cleveland native, sat next to Cavaliers owner Dan Gilbert as the Knicks fell to the defending NBA champions 119-104. He said he was rooting for a good game and rooting for the better team but didn't have much to add about his feud with Knicks owner James Dolan.

The Cavs stood pat at the deadline yet kept rolling as King James and in-season adds Derrick Williams and Kyle Korver handled Melo and the Knicks.

Asked when he would attend a game at Madison Square Garden, Oakley said, "I don't know. I don't know right now."

Frederick Nance, Oakley's lawyer who also was seated near him, says Oakley came to the game as Nance's guest.

"When the Cavs learned we were coming, Dan Gilbert invited us to sit with him," Nance said in a text message.

They sat alongside Gilbert in the customary baseline seat the owner assumes for every Cavs game. Oakley was in a seat usually occupied by one of the Cavs' minority owners or Gilbert's family members.

"Oak will be in his hometown of Cleveland," Oakley spokesman Akhtar Farzaie said earlier Thursday. "When in Cleveland, he always tries to attend a Cavs game."

The former power forward attended his first Knicks game since being arrested after getting into an altercation with security guards at Madison Square Garden earlier this month.

Oakley has a strained relationship with Dolan, who banned Oakley a few days following the incident. Dolan lifted the ban after meeting with Oakley and NBA commissioner Adam Silver. Oakley has yet to accept the invitation and hasn't returned to the Garden.

"Things happen, and it's over," Oakley said. "As far as right now, just trying to just go forward."

Oakley became a fan favorite when he played for the Knicks from 1988 to '98 but has had a falling out with the organization in recent years.

He attended the Knicks game against the LA Clippers on Feb. 8. and sat a few rows from Dolan. Security guards approached Oakley early in the game, and an incident ensued. Oakley was restrained after pushing a security guard before being removed from the building and handcuffed.

Cavaliers star LeBron James has come out in support of Oakley. James finished a recent postgame interview with reporters by saying, "Charles Oakley for president.''

"It's always great to see him,'' James said after Thursday's game. "He's like an uncle of mine.''

Oakley, who attended high school in Cleveland, tweeted his plans of returning to his hometown Thursday morning.

While Oakley's situation has created another element of controversy in the Knicks' lost season, coach Jeff Hornacek found some humor in the situation.

ESPN's Ian Begley and The Associated Press contributed to this report.