No doubt about it, hockey's still great outdoors

Here's the micro view of the news that Saturday's outdoor Stadium Series game between the Pittsburgh Penguins and the Philadelphia Flyers at Heinz Field isn't yet sold out.What do you mean tickets are still available? Why do they have so many outdoor games?... 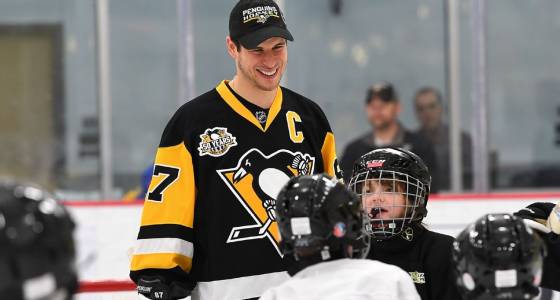 Here's the micro view of the news that Saturday's outdoor Stadium Series game between the Pittsburgh Penguins and the Philadelphia Flyers at Heinz Field isn't yet sold out.

What do you mean tickets are still available? Why do they have so many outdoor games? What if it rains? What if it's too cold? The players look like ants.

You get the point.

Now let's be clear: If the NHL puts on an outdoor game and half the seats are empty, then that's a problem. A big one. And if it ever gets to that point, then shame on the league for its lack of foresight.

But that hasn't happened yet. Not even close. So here's the macro view of things leading up to Saturday's 8 p.m. ET puck drop between the Flyers and the host Penguins.

If, as local and league officials believe will be the case, somewhere close to a capacity crowd of 67,800 shows up at Heinz Field on Saturday night, what's the main story? The few hundred, or a couple of thousand seats that weren't filled -- or the fact that close to 70,000 fans took in the game?

Here's how Penguins president David Morehouse views the outdoor issue: The NHL has one of the highest conversion rates of any sport, according to studies, Morehouse explained. That means that people who watch an NHL game live are more likely to begin following the sport and attending more games, more likely to become hockey fans, than any other sport.

The Penguins sell out every home game at PPG Paints Arena. But lots of folks who don't normally get to see Sidney Crosby or Phil Kessel or Claude Giroux or Jakub Voracek live will have an opportunity to do so on Saturday regardless of whether the event is a sellout or not.

In short, Saturday becomes a chance to convert even more folks in the hockey-mad city into fans.

The original plan for this game was to hold it at a neutral site outside Pittsburgh, at Penn State's Beaver Stadium. But multiple sources said the school's financial demands were far beyond what the league and the teams were willing to pay, so Heinz Field became Plan B.

The game, the second outdoor tilt to be held at the NFL stadium, is part of a reciprocal deal in which the Flyers are expected to host the Penguins for an outdoor game sometime in 2018. The location and timing of that contest has yet to be determined.

In the days leading up to the meeting between the longtime in-state rivals, hockey has been at the forefront in Pittsburgh. The outdoor rink plunked midfield at Heinz Field will play host to youth teams from the two cities, as well as a college game between Robert Morris and Niagara, and the Mario Lemieux fantasy camp.

Additional hockey-related events include a free skate at PPG Paints Arena, a screening of the film "Soul on Ice" and opportunities for area youngsters to try the game for the first time for free. The Heinz History Center is hosting a Penguins exhibit as well as an event with franchise alumni that is free to the public.

The teams could have played at PNC Park, the home of Major League Baseball's Pirates, which has a capacity of 38,362. It would most certainly have been a sellout. But to what end?

Is it the sellout that's important, or the selling of the game?

"It's an event, it's not a game," Morehouse said. "It gets people excited."

It has been more than a decade since the first Winter Classic, at Buffalo's Ralph Wilson Stadium, started a cottage industry of outdoor games. And it was more than 14 years ago that the Edmonton Oilers and Montreal Canadiens laid the groundwork for what has become an integral part of the league's schedule when they played the inaugural Heritage Classic back on a frigid November night in 2003.

All told, the NHL has overseen 21 outdoor games. Those games have drawn an average attendance of 54,333. Only two of them have not been counted as sellouts, including last winter's outdoor game in Minneapolis' TCF Bank Stadium between the Chicago Blackhawks and Minnesota Wild -- which still drew 50,426. The only other non-sellout was between the Ottawa Senators and Vancouver Canucks at B.C. Place in Vancouver in 2014, which wasn't technically an outdoor game given that rain forced the dome to be closed at the home of the CFL's British Columbia Lions. The announced attendance for that one was 54,194.

Yet, pretty much from the beginning there has been a healthy dose of skepticism about the value of the games.

They are all fair questions. The fact is, not all NHL teams are created equal. Some teams "travel" better than others. That is, their fans are more portable. That's one of the reasons that Saturday's game hasn't sold out, according to one league source. Flyers fans are not as apt to travel as, say, Washington Capitals fans -- who swarmed to Heinz Field for the 2011 Winter Classic. That game was also preceded by the first HBO "24/7" documentary, which followed the two teams as they prepared for the outdoor event.

There's no doubt that the NHL has pushed the envelope on outdoor fatigue, with some of its high-profile teams. The Blackhawks (five outdoor games) have been called upon to drive ticket sales over and over again. The Penguins are playing in their fourth outdoor game and the Detroit Red Wings played in their fourth on New Year's Day in Toronto.

Infusing these games with new blood, like the St. Louis Blues, and holding them in new locales -- like the Gateway City, which hosted its first outdoor game, the Winter Classic, on Jan. 2 -- is key. And finding iconic, or at least interesting, venues for the events is also an ongoing challenge -- which is why you'll hear about a possible future game at Notre Dame.

We asked the players to tell us what they thought of the ice in buildings around the league compared with how it used to be as recently as two years ago. And they weren't too happy.

Amid growing concern from players, the NHL and NHLPA have recently initiated a joint project to better identify and resolve issues with ice conditions throughout the league.

The Penguins acquired defenseman Ron Hainsey from the Hurricanes on the same day they announced Trevor Daley will miss six weeks because of knee surgery.

The outdoor game craze had its genesis in thinking outside the box. The challenge for the league now that it's not a new concept is to keep thinking that way, even as the event creeps into middle age.

I've been to 10 of the outdoor games. At each one, the same questions have arisen about the validity of the events. Is this just a cash grab? Is there adequate buzz? Often the questions are asked by people far removed from the actual game and sometimes by folks who've never been to one. Fair enough.

If there is one constant, from my perspective, it has been the air of anticipation from the fans, a sense of excitement at being part of something different -- and, dare I say, unique. The fans who will trundle into Heinz Field on Saturday night won't necessarily care that they're attending Game 22 of the outdoor series. For most of them, it will be something much more singular and presumably memorable.

And in the end, isn't that part of the overarching allure of sports? And shouldn't it trump the fact there might be a few hundred empty seats among the 67,800?