The trade deadline is upon us. The time of year for 29 NHL general managers to make their mistakes.“Brian Burke has that statement about the two times a year that GMs lose their minds, the trade deadline and July 1 (the start of free agency),”... 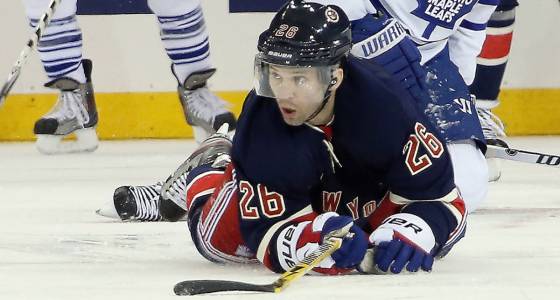 The trade deadline is upon us. The time of year for 29 NHL general managers to make their mistakes.

“Brian Burke has that statement about the two times a year that GMs lose their minds, the trade deadline and July 1 (the start of free agency),” former executive Neil Smith said. “You’ve got 30 GMs and some will be so itchy to do something, to make sure their fans know they were trying to do something to help.

“It’s their day in the spotlight. If you don’t do anything, you give up that spotlight.”

The moves made leading up to the deadline can help you win the Stanley Cup. It can set you up with a solid prospect. It can be a recipe for disaster.

“You can either get caught with your pants down, or catch somebody else with their pants down,” said Smith, now a broadcaster, but also the architect of the 1994 Stanley Cup champion New York Rangers. “If you can stay emotionally unattached, by staying calm, you might be able to find a diamond in the rough.”

The NHL trade deadline is becoming a bit of a TV dud — at least as far as the action on deadline day goes.

The smart teams tend to make their big moves before deadline day, as the Penguins did last year in acquiring forward Carl Hagelin in January and defenceman Trevor Daley in December.

Last year, 20 trades on the day of the deadline, the biggest name among them perhaps Kris Russell (to Dallas from Calgary) or Mikkel Boedker (to Colorado from Arizona) in a couple of deals that didn’t amount to much of anything for anyone.

In 2015, there were 22 trades, Jeff Petry the biggest name, heading to Montreal from Edmonton.

You have to go back to 2014 to find a trade with Stanley Cup repercussions: The Rangers acquired Martin St. Louis from Tampa; the Kings got Marian Gaborik from Columbus and both moves helped set up a New York-Los Angeles final.

“If you’re a seller, and even better if your fan base is a seller, you can do well,” said Smith. “But if you get caught in the position of: ‘I have to do something, this is my last chance,’ you’re probably not going to make a very good deal.

“Be wise, and take your time, and really know what you want and what you need,” said Smith. “And don’t overestimate what your team is. If you’re not a contender — and you can count the real contenders on one hand — don’t go trading for UFAs (pending free agents) at the deadline.”

But there can be smart moves.

Edmonton GM Peter Chiarelli pulled off a very subtle move in landing veteran winger Patrick Maroon from the Anaheim Ducks — who had too many forwards — in a deadline-day deal that today continues to reap benefits for the playoff-bound Oilers.

Not much of a scorer for most of his career, the 28-year-old Maroon has 20 goals now for the Oilers, fitting in nicely on Connor McDavid’s left wing. The cost was defenceman Martin Gernat, now playing in Europe, and a fourth-round pick.

Another smart move: The Leafs taking defenceman Connor Carrick along with forward Brooks Laich from Washington in exchange for winger Daniel Winnik. Winnik was a cheaper upgrade on Laich and remains with the Capitals, who remain serious contenders. The Leafs got a solid defenceman as a reward for taking on a big contract.

“A guy who always stays calm and cool — and maybe ice cold — is Lou,” Smith said of Leafs GM Lou Lamoriello. “He basically couldn’t care less if is in the spotlight. He is very military about it.”

MAKING HISTORY: Auston Matthews and Patrik Laine — each with 30 goals through the weekend — are the highest scoring pair of top-two draft picks (in the season following their draft) in NHL history and the first pair to eclipse 25 goals since Bobby Smith (30) and Ryan Walter (28) in 1978-79. Guy Lafleur (29) and Marcel Dionne (28) also did it in 1971-72.

BLACKHAWKS UP: The Blackhawks have won nine of their last 10 to tighten the race for first place in the Central Division. “A lot of teams are going to make pushes for the playoffs, and acquiring some last-minute additions or players they think will bolster their lineups is always a part of that,” captain Jonathan Toews told the Chicago Sun-Times. “I love our group right now. Everyone’s getting better individually, everybody’s contributing more, and it’s a lot of fun to see the way we’re playing right now. We know the ceiling is way higher, and we can keep getting better, too.”

KILLER B: Part of Boston’s revival — they are 6-1-0 under new coach Bruce Cassidy — is the renewed good play of centre Patrice Bergeron, hampered by an ankle injury early is the season. He had 10 points in his first 32 games, but has 28 in his last 27. “It’s good to be back and feeling good on the ice, all healed up and all that,” Bergeron told the Boston Herald. “And obviously feeding off of Brad (Marchand) every night. He’s always out there giving us momentum. I know that my game is both ways and offence has to be a part of it.”

HUNTING FOR GOALS: The Nashville Predators are humming — 3-0-1 in their last four — but are doing so with sniper James Neal in a slump. He has 18 goals, and should record his ninth 20-goal season. But he has seven goals in his last 30. “I feel like I’ve got to be better,” Neal told the Nashville Tennessean. “That’s really it. Be harder, be accountable and play some better hockey.”

STATS PACK: Columbus goalie Sergei Bobrovsky has matched his career high with 32 wins. . . Chicago forward Artem Anisimov has matched his career high with 22 goals . . . Nashville forward Filip Forsberg is the first Nashville player to score eight goals over four games, and first in the league to do it since Patrick Marleau in 2013. . . Boston forward Brad Marchand has 17 goals, 16 assists since Jan. 1, leading the league in goals in 2017 ... Home teams won three of four NHL Stadium Series games this season and are 8-12-2 all time. . . . Total attendance for the NHL’s 22 all-time outdoor games is 1,208,317.

Keywords:
Over The BoardsLou Lamoriello
Comments