DALLAS -- Coach Rick Carlisle needed only two words to sum up his first impression of Nerlens Noel: "Good trade."It was indeed a dandy Dallas Mavericks debut for the young big man, from the warm welcome Noel received from the home crowd to the steal and... 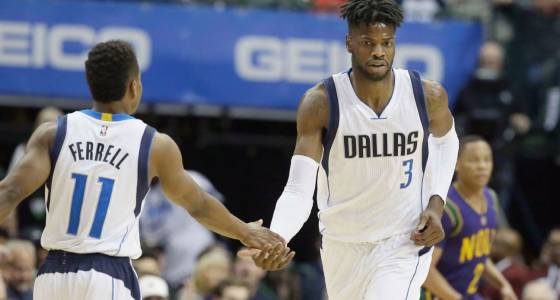 It was indeed a dandy Dallas Mavericks debut for the young big man, from the warm welcome Noel received from the home crowd to the steal and dagger dunk he threw down in the final minute of the 96-83 victory Saturday night over the New Orleans Pelicans.

Noel put up pretty nice numbers in 30 minutes off the bench, scoring nine points and grabbing 10 rebounds. But it's not as simple as scanning the line in the box score to understand his impact. The Mavs see him as a young version of 2011 champion Tyson Chandler, an energizing, high-rising center whose value is much more about defensive disruption and offensive spacing than traditional statistics.

"They do it with speed, with athleticism, with length, with good hands on defense," Dirk Nowitzki said. "I can definitely see some of the same stuff."

Noel never got the opportunity to fully tap into his potential during a frustrating nearly four years in Philadelphia. He struggled with injuries and got stuck in a big-man logjam with the 76ers, which is why he described himself as "ecstatic" to learn that he was being dealt with Dallas, which pounced on the chance to trade for a 22-year-old lottery pick at a bargain price.

The same can be said for his new team. Dallas has been in desperate need of young potential foundation pieces for years. They’ve got at least a pair now, with Noel joining 24-year-old Harrison Barnes.

Barnes, a role player in Golden State, has blossomed since given the opportunity to be a go-to guy with the Mavs. Noel's scoring average will probably not similarly soar with the Mavs, but it doesn't have to for him to make a major impact for the foreseeable future.

Noel's ability to roll hard to the rim and finish represents a critical element that the Mavs' offense has mostly lacked for the last few years. It's not a coincidence that Nowitzki had such an efficient offensive night against the Pelicans, scoring 18 points on 8-of-12 shooting. A few of those buckets came on wide-open looks, with Nowitzki doing nothing but spotting up on the weak side, benefiting from his man being sucked into the lane by Noel diving to the rim.

"He had an impact on offense even in situations where he wasn't touching the ball," Carlisle said.

"We're all going to have to learn how to throw lob passes," Barnes said with a smile.

There will be plenty of nights that Noel, who has a rare combination of hops and hands, gets multiple blocks and steals. This wasn't one of them, but his defensive activity made a major difference regardless. The Pelicans, who feature All-Star bigs Anthony Davis and DeMarcus Cousins, were pathetic offensively (82.2 points per 100 possessions) when Noel was on the floor.

Noel still hasn't had a practice with the Mavs, prepping for his Dallas debut by meeting with coaches Saturday morning and afternoon, but he knows exactly how he can help this team. Like any young player, he wants to develop his skills and expand his game, but Noel understands the value of being a simple, springy, screen-and-roll threat on offense and a dominant, versatile defender.

How exactly Noel fits in the Mavs' rotation for the rest of the season remains to be determined. That's a somewhat complicated situation, considering that the Mavs have had the most success this season with their 38-year-old legend starting at center. Carlisle said he doesn't consider Nowitzki coming off the bench to be "a good option," and considers Barnes’ natural position to be power forward.

"Noel's going to be the starting center here," Carlisle said, but he's talking about the future, not necessarily the rest of this season. "I do think he'll get some starts this year. I just can't tell you when or how frequently or exactly how it's going to go. That's the truth."

It's not an issue that Noel is losing any sleep over, particularly not after averaging less than 20 minutes per game behind Joel Embiid in Philadelphia this season.

"I'm a competitive person, but I'm an understanding person," Noel said. "I understand the situation. It's nothing but, what can I do to help the team?"

What can Noel do to help? He displayed a lot of ways to do that in his Dallas debut.