When the award presentations began after the last final of the District 3A wrestling tournament Saturday night, it made for a very special moment for Nazareth’s Wilson wrestling family. The first gold medal presented went to Brock Wilson, the Blue Eagles’... 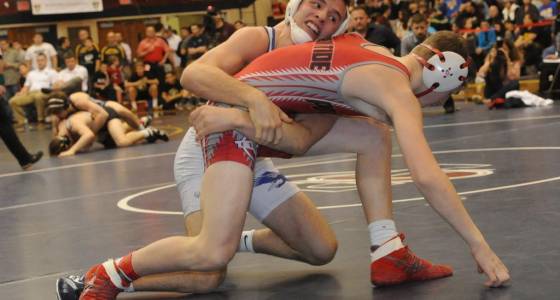 When the award presentations began after the last final of the District 3A wrestling tournament Saturday night, it made for a very special moment for Nazareth’s Wilson wrestling family.

According to the list of D-11 champions in Nazareth’s wrestling program, well-stuffed with historic information, it was the second time in Blue Eagle history that brothers won gold at D-11 in the same year; Travis and Eric Frick did in 2001.

“That will be awesome for both of us,” said Brock Wilson, who won his second D-11 crown, before the awards ceremony; it was Cade’s first. “I am so proud of Cade.”

The marvelous moment for the Wilsons was one of many on an terrific night for Nazareth at Liberty’s Memorial Gym.

Nazareth is sending nine wrestlers to next weekend’s PIAA 3A Northeast Regional; only Bethlehem Catholic (10) had more in D-11.

The Blue Eagles also shone in the hardware department, While Becahi got past Nazareth 240-223 for the team title (something nobody on either side seemed overly excited about), Sasso was voted Outstanding Wrestler after his powerful and slick 13-5 major decision over Northampton’s Danny Moran (ranked No. 1 by lehighvalleylive at 138 before Sasso’s drop) in the final and head coach Dave Crowell was named D-11 3A Coach of the Year by his peers.

So, a terrific night by anybody’s standards for Nazareth, but especially for the Wilson brothers. But, oddly, it was Brock Wilson, one of the most careful and well-controlled wrestlers you’ll ever see, who almost threw a pall over the whole evening.

Leading by a seemingly secure third-period 5-0 lead over Pottsville senior Richard Bentz in the final and knew just what to avoid from Bentz.

“I knew the headlock was his big move,” said Wilson, especially after Bentz had decked Becahi senior Luke Carty with it in a Saturday semifinal. “I’ve seen him use it. That’s his move.”

And just as the chatter on press row turned to how Wilson’s smarts and savvy would keep him from Bentz’s clutches … bang.

Headlock, throw, and Wilson battling to get off his back. While Wilson was never close to being pinned, despite the crowd reaction that lustily booed the non-fall call, it was an unnerving moment.

“I relaxed for a second and he hit it,” Brock Wilson said. “It was obviously not the ideal situation, but I felt pretty good bridging coming off the bottom and in the past I have been able to roll kids through in that situation. There was a moment when his arm got caught around my neck and everything almost went black but I was able to get my arms in and get on his leg.”

Not only did Wilson get off his back after the bout-tying five-point move, he reversed Bentz with 15 seconds left in the bout to win 7-5.

“If it went to overtime so be it,” Wilson said. “I felt I dominated most of the match and had it gone to overtime I wouldn’t have been worried about it.”

It was Cade’s final that went the usual no-drama Brock as Cade dominated on top to handle Liberty senior Anthony Emig 3-0. The way the bout went didn’t surprise Brock at all.

“Cade has gotten so much better on top and riding,” Brock Wilson said. “We wrestle a lot in the practice room. I was handling him though he’s bigger than me, and now he’s taking it to me. Sometimes now he gets me.”

Stefanik looked like a top-shelf BMW performing at top efficiency as he batted aside Liberty sophomore Damen Moyer with what looked like ease (it wasn’t) 16-7 in the final at 182.

But at 106, Cerniglia pulled off the rather difficult feat of being taken down four times, three in the first period – and winning 9-8 over Pottsville’s gritty Nick Onea.

And then at 138, in the night’s feature attraction in the final bout, Sasso, ranked No. 2 nationally at 138, wore down Moran, who made a brave effort and wrestled aggressively, to post a quite impressive 13-5 major decision that was never really in doubt.

Watching Nazareth’s quintet of champions, few would bet against all five Nazareth D-11 champs topping the podium at regionals, just as the Fricks did in 2001 as well.

“That would be awesome,” Brock Wilson said.

For an awesome pair of wrestling brothers, yes -- and make that a trio, as there's Blaine, a freshman.