Monmouth is team of the year and other NYC area awards

For far too many casual fans, college basketball season is now just beginning.While the NCAA Tournament and upcoming conference tournaments are more enthralling than anything in sports, the regular season also remains riveting, with the Metropolitan Area... 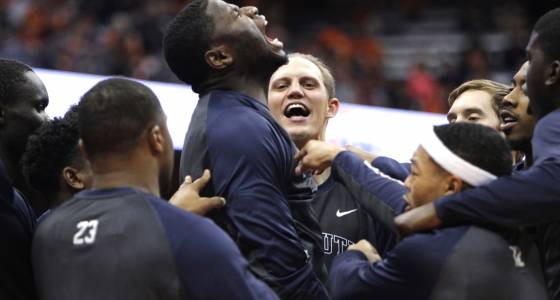 For far too many casual fans, college basketball season is now just beginning.

While the NCAA Tournament and upcoming conference tournaments are more enthralling than anything in sports, the regular season also remains riveting, with the Metropolitan Area providing a look at multiple teams and stars who could soon barge into the Big Dance.

But before we move forward, let’s take a look back, with this season’s Courting the Area award winners:

Team of the Year: Monmouth

Even without the bench theatrics stealing the national spotlight, King Rice’s crew takes home the top prize for the second straight year. Monmouth steamrolled through the MAAC to win another regular season title and reeled off one of the nation’s longest winning streaks, led by star guard Justin Robinson. Few Goliaths will feel comfortable matched up against the senior-heavy Hawks in the big bracket.

With Isaiah Whitehead gone, Delgado took a massive leap as a junior, averaging 15.7 points — nearly six more than last season — while leading the nation in rebounding (13.1). The 6-foot-10 Dominican is second in the country with 22 double-doubles and is on pace to set the Big East’s all-time single-season rebounding record.

After reaching the NCAA Tournament for the first time last March, Stony Brook’s rebuilding was supposed to begin, with star Jameel Warney, longtime coach Steve Pikiell and the rest of the team’s core gone. The Seawolves were picked to finish seventh in the America East, but first-year head coach Jeff Boals kept them in contention after a slow start, leading an unproven roster to a surprising second-place finish in the conference.

It’s only appropriate the Red Storm’s starring backcourt share the honor, having spent much of the season alternating as the team’s most electric player. The young guards became two of the Big East’s best playmakers — combining for more than 34 points, along with 7.1 assists and 3.4 steals — while showing strong chemistry, content to allow each other to shine.

As a freshman, Wright-Foreman averaged 4.1 minutes and 1.6 points. As a sophomore, the Queens native became the nation’s most improved scorer. He unexpectedly became the Pride’s go-to guy this season, averaging 17.9 points while shooting over 50 percent from the field. He has averaged 26.3 points over the past 10 games.

LIU Brooklyn’s senior deserves a little recognition before finishing his career. Frink, a 6-foot-7 forward, has scored in double-figures in all but two games this season, carrying the Blackbirds to second-place in the Northeast Conference with a team-best 16.8 points and 8.9 rebounds per game. In the early season upset of St. John’s, Frink posted 20 points and 12 rebounds.

It has lost some luster, with the Huskies now barely hovering above .500, but the small Staten Island school will remember this upset of the four-time national champions for a long time. With the 67-58 win over then-No. 18 UConn, the Seahawks became the first team to beat the Huskies in a season-opener on their campus.

For the second straight year, St. John’s knows next season should be even better. After one of the school’s worst seasons ever, the Red Storm struggled again in non-conference play, but finally showed their potential in the Big East. Ponds and LoVett will be joined by transfers Marvin Clark (Michigan State) and Justin Simon (Arizona), providing enough depth to warrant expectations from Chris Mullin’s team for the first time.

Just two years ago, the Terriers won a regular season title and hosted a conference championship game, but their first NCAA Tournament appearance seems as far away as ever. St. Francis (4-26) enters its final game of the season with 15 straight losses.

College basketball is never crueler than in conference tournaments. Monmouth has won 52 games over the past two seasons, but without three wins in Albany at the MAAC Tournament, the Hawks will head to the NIT again. Monmouth clearly was bothered by the pressure of being the heavy favorite last season, and will face even more stress this time, with its senior-heavy core knowing it is their final opportunity.

The Catamounts are undefeated in conference play and already have locked up the America East regular season title, along with home court through the conference title game. With a win in a potential championship preview, the second-place Seawolves could be seen as a true threat.

The Hawks have been as dominant as last season, but their second straight MAAC regular season title was claimed in far quieter fashion. Still, this season’s version needs to avenge last year’s title game loss to Iona, which remains a sleeper with its always impressive offensive arsenal.

The Pirates are back on the right side of the bubble after wins over Creighton and Xavier, but they remain one slip-up from danger. Though the Hoyas have lost four of their past five games — including a home loss to last-place DePaul — they took Seton Hall to overtime earlier this month.

Up next: Saturday (Noon) vs. Georgetown

Up next: Saturday (Noon) at James Madison