Mika leads BYU to upset of No. 1 Gonzaga

SPOKANE, Wash. — Eric Mika had 29 points and 11 rebounds to help BYU upset No. 1 Gonzaga 79-71 on Saturday night, ending the Bulldogs' quest to go undefeated in the final game of the regular season.Nigel Williams-Goss scored 19 points for Gonzaga (29-1,... 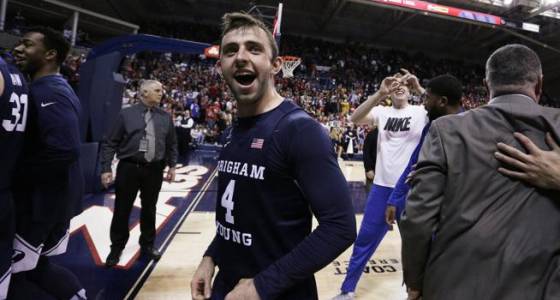 SPOKANE, Wash. — Eric Mika had 29 points and 11 rebounds to help BYU upset No. 1 Gonzaga 79-71 on Saturday night, ending the Bulldogs' quest to go undefeated in the final game of the regular season.

Nigel Williams-Goss scored 19 points for Gonzaga (29-1, 17-1 West Coast), which was seeking to become the first team since Kentucky in 2014-15 to finish the regular season without a loss.

Gonzaga lost the ball on its next two possessions, and Corbin Kaufusi had a putback and Mika hit two free throws to put the game out of reach.

The last team to finish the entire season undefeated was Indiana in 1975-76.

Gonzaga came out fired up and jumped to an 18-2 lead in the first five minutes, making 7 of 10 shots.

The Zags cooled off and three consecutive 3-pointers by BYU's T.J. Haws cut Gonzaga's lead to 26-22.

Mika's basket cut Gonzaga's lead to one point before the Bulldogs closed with a 10-5 run to take a 41-35 lead at halftime.

A technical foul on Gonzaga helped BYU cut its deficit to 58-53, and seemed to spark the Cougars. A pair of 3-pointers by Nick Emery cut Gonzaga's lead to one, and Mika's basket gave the Cougars their first lead at 61-60.

The teams traded baskets until Mika put the Cougars ahead for good.

BYU: The Cougars won the previous two games in Spokane and lost by just 10 points to the Bulldogs in Provo earlier this season. Mika averages 19.9 points and 9.3 rebounds per game.

Gonzaga: The Bulldogs have won their 20th WCC title and fifth in a row. Four of the previous five teams to start the season 29-0 in the last 40 years have advanced to the Final Four.

BYU plays in the WCC Tournament in Las Vegas next week.

Gonzaga plays in the WCC quarterfinals in Las Vegas next Saturday.