During a relatively slow week on the college football calendar, Michigan head coach Jim Harbaugh filled out his support staff, slow-danced in a student talent show and addressed his years-long offseason sniping match with the SEC. So, it was a slow week on... 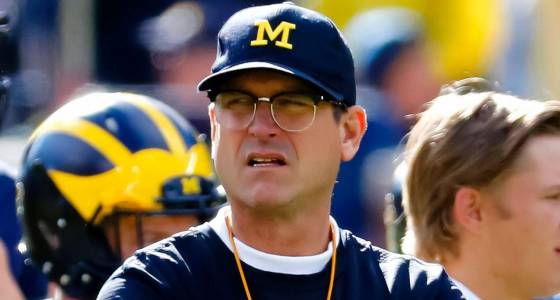 During a relatively slow week on the college football calendar, Michigan head coach Jim Harbaugh filled out his support staff, slow-danced in a student talent show and addressed his years-long offseason sniping match with the SEC. So, it was a slow week on Harbaugh's calendar, too.

The Wolverines added two former coaches as analysts and a new player personnel director to their substantial cadre of off-the-field staff members this week. All three hires were for previously existing roles.

Kevin Lempa left his job as the defensive coordinator at Hawaii to work as a defensive analyst on Jim Harbaugh's staff. Lempa, a seasoned NFL and college veteran, worked with Michigan defensive coordinator Don Brown during past stops at Boston College and Maryland. He also worked on the San Diego Chargers staff when Harbuagh was a quarterback there in 1999.

He’ll reportedly be joined on Michigan’s team of analysts by former NFL quarterbacks coach Scott Turner, the son of longtime NFL offensive coordinator Norv Turner. Scott Turner spent the past three seasons with the Minnesota Vikings helping to groom quarterbacks Teddy Bridgewater and Sam Bradford. The Vikings parted ways with Turner in January despite his track record of success. Norv Turner resigned from the coaching staff in the middle of the season. The father-son duo had been a package deal during their past couple stops in the NFL.

Michigan has yet to officially announce the addition of Turner. His hire was first reported by TheMMQB.com.

Lempa and Turner are both potential candidates to move into an on-field coaching role in the future if the NCAA Division I Council votes to allow FBS programs to add a 10th assistant coach to their staffs. Current rules allow nine assistants and the head coach to work with players directly on the field. The council will vote on the proposal in April, but might not allow schools to add a 10th assistant after the 2017 football season ends.

Former Navy director of player personnel Sean Magee also joined the Wolverines staff this week. Magee worked with the Midshipmen for five years and takes over as a similar role at Michigan. He played offensive line at Navy and started working for the football program after serving his time in the military.

Magee is Harbaugh’s third player personnel director -- a role heavily involved in the recruiting process -- in his three years at Michigan. The past two men to hold that job have gone on to assistant coaching positions. Chris Partridge coaches the Wolverines' linebackers and Tony Tuioti left after this past season to become an assistant at Fresno State.

Reports that Michigan was going to hire Michael Johnson -- another former NFL coordinator -- in a support role didn’t pan out, which brings us to some of the more lighthearted fare for Harbaugh this week. Johnson’s son is considered one of the country’s top high school quarterbacks heading into his junior year. That made some, including ESPN’s Paul Finebaum, question Harbaugh’s motive for potentially adding Johnson Sr. to the staff.

Harbaugh responded, as he’s prone to do, via Twitter. While talking to San Francisco reporter Tim Kawakami on a podcast this week, he addressed the annual offseason social media spats he’s had with SEC coaches and others while at Michigan.

"It hasn’t been a conscious act or target," Harbaugh said. "It’s been responses. Like the great Sugar Ray Robinson, he’s a great counter-puncher. They’ve attacked us numerous times and we just counter-punched them. We’ve not been the aggressor toward anybody."

He added that though he takes most of this back-and-forth with a grain of salt and a larger helping of good humor, he also doesn't plan on backing down to any questions about his integrity in the future.

Michigan wide receiver Grant Perry's pre-trial hearing for one felony and three misdemeanor charges was pushed back to March 16, according to a report from MLive.com. Perry is accused of groping a woman outside of an East Lansing bar last October and then fleeing from police officers. He was suspended from the team indefinitely in December when he was formally charged.

Harbaugh confirmed that tight end Devin Asiasi is transferring from the program. The California native had one touchdown catch in his first college season in 2016. The coach, who confirmed Asiasi's departure to reporters after serving as a celebrity judge for a mental illness awareness event on Michigan’s campus, said Asiasi was leaving in "great status" with the program.

Prior to speaking to reporters, Harbaugh made a guest appearance during the "Mock Rock" talent show with his wife, Sarah.