The drama surrounding Jimmy Garoppolo and Kirk Cousins continues to hold mock drafts hostage, so there will be inevitable changes following the NFL Combine — aka the Underwear Olympics — and free agency, but the late Yogi Berra would have thanked us for... 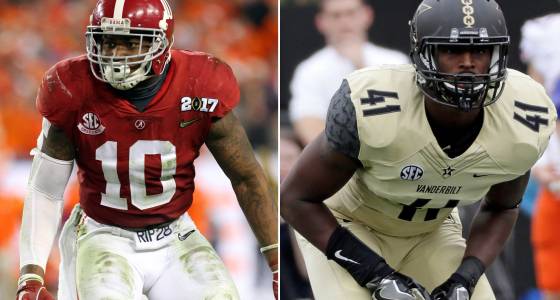 The drama surrounding Jimmy Garoppolo and Kirk Cousins continues to hold mock drafts hostage, so there will be inevitable changes following the NFL Combine — aka the Underwear Olympics — and free agency, but the late Yogi Berra would have thanked us for making the Serby Mock Draft 2.0 necessary. A coin flip will decide the Eagles-Colts draft order.

Hue Jackson needs a quarterback — Browns head coaches always need a quarterback. But this is a franchise that cannot afford to reach for one, so they pass, and instead land a 6-foot-5, 270-pound predator who can get the Dawg Pound barking with delight.

New coach Kyle Shanahan needs a quarterback. But he and GM John Lynch inherit a defense that surrendered a franchise-record 2,654 rushing yards, and is switching to a 4-3. Maybe Joe Montana will give a thumb’s up to Mitch Trubisky.

John Fox needs a quarterback. This one-year wonder might not help him in time to keep his job, but he is the most accurate of the contenders.

New team president Tom Coughlin signs off on a sidekick for Jalen Ramsey for the next decade to cope with Andrew Luck and Marcus Mariota.

GM Jon Robinson desperately needs to upgrade his 30th-ranked pass defense, and though corner is a greater need, this 211-pound intimidator is too good to pass on.

Anyone who is compared to Ed Reed is the perfect ballhawk to fill the void left by Eric Weddle’s departure once he rehabs from labrum and hernia surgery.

Keep pounding behind Cam Newton with Jonathan Stewart’s wheels soon to fall off. Maccagnan and the Jets really passed on an elite power back like this?

Tiger coach Dabo Swinney convinces Buffalo GM Doug Whaley not to pass on Michael Jordan. Another project, but too many intangibles to be another EJ Manuel, either.

An Ohio kid with prototypical size and the right man to fix and develop him.

Someone has to rush the passer now that Robert Mathis won’t be.

Someone has to cover Odell Beckham Jr. and Dez Bryant.

Ozzie Newsome snags a gamebreaking talent with durability and baggage concerns to take some heat off Joe Flacco.

His nickname is “The Bull,” exactly what coach Jay Gruden needs to slow Ezekiel Elliott and upgrade his 24th-ranked run defense.

A big receiver for Mariota.

Cameron Brate (eight touchdowns) was a revelation last season, but this is a 6-foot-6, 245-pound target down the seam for Winston. Sorry, Eli.

NFL Network analyst Mike Mayock prefers him inside, but if Denver GM John Elway green-lights this monster’s off-the-field baggage, he might need him to start at right tackle if free agent LT Andrew Whitworth is signed to replace Russell Okung.

A mere 33 years after Carl Banks, Big Blue finally uses a first-rounder on a linebacker, a 6-foot-4, 230-pound tacking machine.