Jeremy Lin makes a cameo — and the Nets get demolished

DENVER — Jeremy Lin’s return from yet another long layoff — and the reset the Nets had hoped for over the remainder of the season — didn’t go as planned.Lin was back Friday after missing eight straight weeks with a hamstring injury, and the Nets... 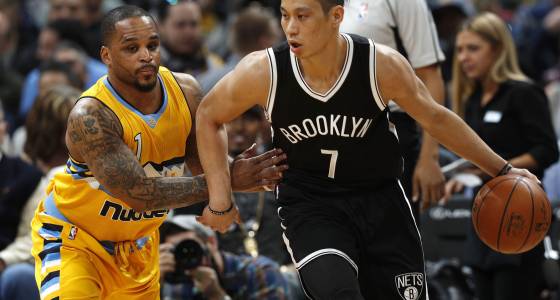 DENVER — Jeremy Lin’s return from yet another long layoff — and the reset the Nets had hoped for over the remainder of the season — didn’t go as planned.

Lin was back Friday after missing eight straight weeks with a hamstring injury, and the Nets were back after the All-Star break. But the first game post-break looked like most of the pre-break games: Another loss.

Lin scored seven points and had five assists in 14:49 and the Nets got bludgeoned 129-109 by Denver in front of 17,143 at Pepsi Center. And they were next-level sloppy in doing it, from allowing 50.5 percent shooting, to making just 17-of-31 from the free-throw line to giving up 62 points in the paint and 51 rebounds. The Nets let three Nuggets hit the 20-point mark: Gary Harris (game-high 25), Wilson Chandler (24 off the bench) and Danilo Gallinari (20).

Brook Lopez had a team-high 17 points, but the Nets ran their NBA-long losing skid to 15 straight, and fell to 9-48 — still worst in the NBA — despite Lin playing for the first time since Dec. 26.

Lin’s injuries in essence ruined the Nets’ season, as he missed 44 games due to hamstring (and back) woes.

It was only Lin’s 13th game of the season, and just his 10th start. For the Nets, gauging how Lin and Lopez — their two best players — work on the court together for a legitimate stretch will be vital in determining the team’s immediate future.

“Obviously, we’re starting [Lin], so that’s a sign. I can’t promise you it’s going to be 100 percent [with Lopez], but we’d like to see that unit together,’’ coach Kenny Atkinson said beforehand.

“Obviously looking forward to when [Lin is] full go and we don’t have to worry about any of that stuff.”

That’s a pleasure the Nets haven’t enjoyed all season. Lin and Lopez have only played 11 games together, and the Nets are 3-5 when they have started together. It’s unclear if not having sufficient time to judge the two players together played any role in general manager Sean Marks’ decision not to deal Lopez at Thursday’s trade deadline.

Lopez is the face of the franchise, on his ninth coach and making his 504th start Friday to move into a tie with Jason Kidd for second-most in Nets history.

“I didn’t think [Lopez would get traded],” Lin said. “I wasn’t that nervous, because I didn’t feel like something would happen. … I didn’t think he was going to get moved, so I wasn’t too nervous. I’m definitely excited to be back out on the floor with him.’’

Lin expected the Nets’ return after the All-Star break would provide a fresh start.

“Yeah, definitely, because we have new players,” he said. “It’s definitely new for me, because game day used to be a lot of rehab … but now it’s back to the schedule I usually have. And then All-Star break, even if we didn’t make any moves it would’ve been some type of reset. So we all definitely have that fresh start.”

They didn’t make the most of it against the Nuggets, a team they had led by 29 and ultimately beat on Dec. 7 in Brooklyn. But after conceding 10 straight points, the Nets trailed 14-9 with 7:44 left in the first quarter Friday. They were down 24-14, and 37-29 early in the second quarter before trying to rally.

Back-to-back 3-pointers by Randy Foye and Isaiah Whitehead got the Nets within 37-35, but that’s as close as they got. The Nuggets regained control of the game and Brooklyn faded, trailing 64-49 late in the second quarter and 101-75 at the end of the third. The deficit reached 32 in the fourth.

“[Lin and I] obviously are confident in what we can do together. We know we have to go out there and do it game-by-game. We’ve had a little taste of it before,’’ Lopez said. “We’re excited to help our team win in whatever way possible. That’s the most important thing, is just putting wins on the scoreboard.”

Those wins have been desperately tough to come by, too few and far between. It won’t get any easier, at the NBA-leading Warriors (48-9) on Saturday.