Galleries Videos CONTACT ADVERTISE
Famagusta 23°
few clouds
BUSINESS EDUCATION ENTERTAINMENT HEALTH POLITICS SCIENCE SPORTS TECHNOLOGY
12:08 Guide To Online Sports Betting: How To Choose A Sportsbook
08:28 What Are Some Reasons to Consult a Brain Injury Lawyer?
09:24 Blockchain Solutions for Enterprises: How To Increase Efficiency And Profitability
07:06 How To Deal With A Car Crash In New York
17:43 Tips to keep in mind while choosing the casino site
11:34 Relation Between Employee Theft and Pre-employment Screening Check
04:37 Search your own desired site to play sports for betting
18:00 Top 3 Career Path Options for Business Analysts Preview
15:35 The history of Imen Jane, who is the influencer and the charges on the...
18:48 Sebastian Vettel's Greatest Races
BIST
1120
GOLD
457.617
USD
7.6108
GPB
9.7150
EUR
8.8768
Breaking News
Top 3 Career Path Options for Business Analysts Preview
Close

Jeff Miller: What a difference a years makes at UCLA

LOS ANGELES >> UCLA basketball, here, on the first day of March, is all about what could be coming, the possibilities as elevated as the Bruins themselves, and they’re all the way up to No. 3.First, though, comes recognition of where this program... 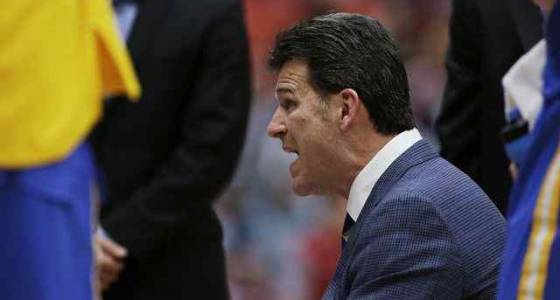 LOS ANGELES >> UCLA basketball, here, on the first day of March, is all about what could be coming, the possibilities as elevated as the Bruins themselves, and they’re all the way up to No. 3.

First, though, comes recognition of where this program has been. For the past four seasons. For a coach and a player. For a father and a son.

“It will be emotional,” Bryce Alford said, entering his final stretch at UCLA playing for his dad, Steve. “But we’ve done a great job of holding in our emotions as a father-son duo. So, I don’t think it will be a problem.”

They’ve held it in … and held it together, the Alfords have, something that never was challenged more graphically than 12 months ago, a time when the discontent in Westwood was clearly visible to everyone.

All you had to do was look up, where a plane buzzed over campus towing a sign that read, “UCLA deserves better! Fire Alford!”

The words were directed at Steve, though the sentiment, given how sweeping the frustration was among the Bruins faithful, could have applied to Bryce, as well.

Thanks to the addition of program-altering freshman Lonzo Ball, the Bruins are the ones soaring among the clouds these days, their potential just as easy to read as that banner.

“Are we in a ‘win business?’ Yes, I get all those things,” Steve Alford said. “But I’ve never been stressed out that the world’s coming to an end if something happens to me job-wise. The job’s never going to define who I am.”

Especially this week, when the coach, probably more than ever during these past four years, will be a father.

Home games tonight against Washington and Saturday against Washington State will bring to an end Bryce’s playing days at Pauley Pavilion, a heartwarming stop for the Alfords before what could be a heart-racing run for their team.

“I’ve seen him grow,” Steve said. “I’ve seen him come in as an 18-year-old and now as a 22-year-old, and I’m very excited about his future because I think the things that he has endured … he’s a better man.”

There have been the “daddy’s boy!” chants at enemy arenas and the requisite perceptions of preferential treatment and the early questions about his ability to even play at UCLA.

The heat has been internal, too, Bruins fans over the years mocking everything from Bryce’s shot selection to his point guard skills to his defense, the kid admirably thriving now, while still performing in a petri dish.

If you think that’s easy, see what kind of vertical you can generate while pinned beneath a microscope.

“There aren’t too many players who have been critiqued more in a four-year frame than Bryce has,” Steve said. “That’s all part of it. That’s all part of having the same name as the head coach. He knew that when we came here.”

When March of 2016 arrived, the Bruins were in the middle of a five-game losing streak that would end their season abruptly and, even worse, at the hands of USC.

They were 10th in the Pac-12 and had just guaranteed, with a defeat at Stanford, a losing conference record for only the fourth time since 1948-49, the year John Wooden became coach.

Following the loss to the Cardinal, Bryce Alford emerged from the visiting locker room and announced, “The team is kind of a lost cause right now.”

Understand that the comment cut deeply and directly at him as a leader and his dad as the coach.

Bryce further explained that the Bruins were “just too nice out there. You can’t be nice in the game of basketball. … You gotta go out and be nasty on both ends of the court.”

In just 12 months, that’s an awful lot of nice to outgrow, the Bruins also going from “a lost cause” in one February to not losing at all (7-0) during the next February.

“That seems like a long time ago,” Bryce recalled Tuesday. “This year has been so much different than last year with how much fun we’ve had, how we’ve taken every challenge head on and we’ve succeeded.”

And now the Bruins are down to two final home games before a most anticipated postseason begins next week.

Recognition, too, for Steve Alford, a coach some people wanted fired last year but a dad who, no matter the outside noise, never considered quitting on his son.