DUNEDIN, FLA.—Josh Donaldson’s return to batting practice is cause for optimism, as far as manager John Gibbons sees it.The star third baseman, who suffered a right calf strain 12 days ago and is expected to be out at least two to three weeks,... 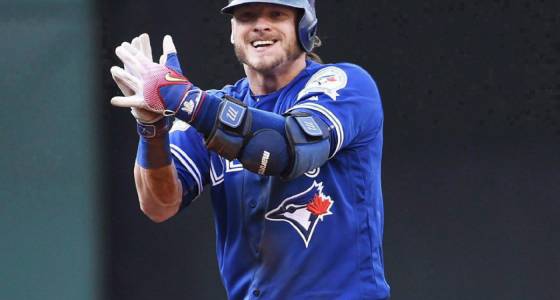 DUNEDIN, FLA.—Josh Donaldson’s return to batting practice is cause for optimism, as far as manager John Gibbons sees it.

The star third baseman, who suffered a right calf strain 12 days ago and is expected to be out at least two to three weeks, got back into the thick of things on Tuesday. A day later, the manager weighed in.

“To be honest with you, it looked like he hadn’t been out of action at all, really,” Gibbons said. “But you know, with the guys who can hit that’s kind of that way it goes sometimes. He felt good, that was a big day for him.”

Donaldson, who injured himself while doing sprints in the early days of spring training, is next tasked with starting to run again.

On Tuesday, the 2015 AL MVP said his calf was feeling good but wouldn’t put a date on his returns.

Gibbons had no added insight to offer on Donaldson’s comeback.

“The sooner the better. We don’t have a target date necessarily. He’ll go through with the trainers and the medical folk in there to determine that. It’s March 1, we’ve still got a long way to go. He’ll have plenty of time but yeah, they haven’t given me a set date yet.”

Donaldson said his plan is to listen to his body; Gibbons believes the player knows better than to rush himself back before he’s ready, just because he wants to get in the game.

“I think he’s smarter than that. He knows at this stage in his career that he’d be stupid to get in there too soon,” Gibbons said.

At this point in spring training, veteran guys like Troy Tulowitzki have yet to debut. Donaldson would have been on that same timeline had he not been injured, Gibbons said.

“We were going to back him off a bit anyways, that was the plan before this happened so he might have have been playing anyway yet.”

But there are some other big names in the lineup for the Blue Jays as they take on the Detroit Tigers on Wednesday afternoon, a day after the team’s first spring training win of the season.

Kevin Pillar, Russell Martin, Jose Bautista, Justin Smoak, Melvin Upton Jr., Darwin Barney and Ryan Goins are all in the lineup for the Tigers’ visit as Gibbons inches his team closer to the kind of squad that will represent the Blue Jays come the regular season.

Starting rotation pitchers J.A. Happ and Francisco Liriano are on deck to start on Thursday and Friday against the Philadelphia Phillies and the New York Yankees, respectively.