The Giants took the first step toward retaining free agent Jason Pierre-Paul by applying the non-exclusive franchise tag to the defensive end on Monday, according to a report by Pro Football Talk. Pierre-Paul was set to become an unrestricted free agent... 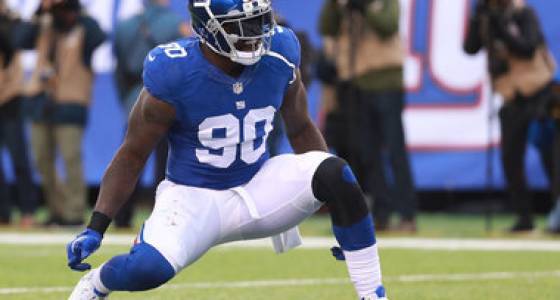 The Giants took the first step toward retaining free agent Jason Pierre-Paul by applying the non-exclusive franchise tag to the defensive end on Monday, according to a report by Pro Football Talk.

Pierre-Paul was set to become an unrestricted free agent next week. The deadline to apply the franchise tag is Wednesday at 4 p.m.

By applying the non-exclusive franchise tag, the Giants have ensured that they will have the ability to keep Pierre-Paul. But the situation is not yet resolved.

Should Giants bring back Jason Pierre-Paul?

The franchise tag guarantees Pierre-Paul a one-year guaranteed contract worth approximately $17 million for the 2017 season. The Giants and Pierre-Paul will likely enter negotiations for a long-term contract that will give him more guaranteed money, while lowering his salary cap hit for next season.

The application of the non-exclusive tag allows Pierre-Paul to negotiate with other teams. The Giants will be able to match any offer sheet from another team. If the Giants decide not to match an offer sheet, they will receive two first-round picks from the other team as compensation.

Pierre-Paul's value was limited after a July 4, 2015 fireworks accident mangled his right hand. He signed a one-year, $10 million contract before the 2016 season and then recorded 53 tackles, seven sacks and three forced fumbles before suffering a season-ending core injury in Week 13.

Pierre-Paul said after last season that he was not interested in another one-year deal. The 28-year-old also said that he is seeking a long-term contract.

The Giants applied the non-exclusive franchise tag to Pierre-Paul in March of 2015. He hadn't signed the tender at the time of his infamous fireworks accident. He eventually signed a one-year, incentive-laden contract worth $8.7 million and appeared in the final eight games of the 2015 season.

The Giants selected Pierre-Paul with the 15th overall pick in the 2010 draft. He was a Pro Bowl selection in 2011 and 2012, recording a career-high 16.5 sacks in 2011. Pierre-Paul showed flashes of that form last season and he formed a strong duo with defensive end Olivier Vernon, who signed a five-year, $85 million free-agent contract with the Giants last offseason.