Imrem: Could Ricketts build a Cubs hall of fame without Sosa?

I don't intend to invite Sammy Sosa into my family room this month to share a pizza and catch a few innings of a Cubs exhibition game.First, a good guess is that we have different tastes in toppings, his being Flintstone vitamins and mine being pepperoni.Second,... 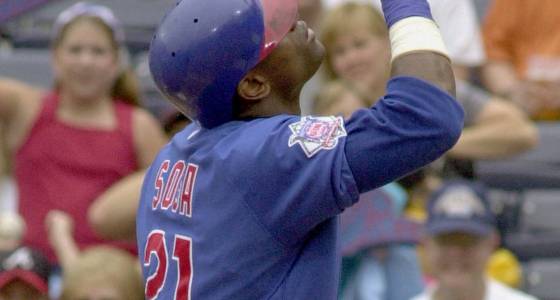 I don't intend to invite Sammy Sosa into my family room this month to share a pizza and catch a few innings of a Cubs exhibition game.

First, a good guess is that we have different tastes in toppings, his being Flintstone vitamins and mine being pepperoni.

Second, unlike me, Sosa seems to have a life and better things to do than watch guys wearing Nos. 60 through 100 try to play baseball.

Third, my TV is only 65 inches and Sosa's family room likely has one about the size of a Metra club car.

So, no, I'm not about to invite the Samminator home for pizza.

But the Cubs should.

(Interestingly, Sosa's remarks surfaced about the time of the year that he used to show up to Cubs spring training and declare, "This is my house!")

Sosa's remarks were dumb, like using himself and Jesus Christ in the same context and saying he put Chicago on the map.

The next day a published report cited anonymous sources -- sorry, Mr. President, that's how it works sometimes -- saying the chances of the Cubs welcoming back Sosa are dead.

They shouldn't be: Cubs chairman Tom Ricketts should begin the process of reconciling with Sosa.

All the peripheral stuff can be categorized as irrelevant.

What matters is that Sammy Sosa hit 545 home runs in a Cubs uniform and recorded more than 60 in a season three times.

What also matters is that the 1998 home-run race between Sosa and Mark McGwire helped revive the sport after a labor dispute canceled the 1994 World Series.

Finally, what matters is that until the Cubs won a championship last season, Sosa created the most sustained excitement in Wrigley Field since 1908.

Sure, I believe Sosa played on PEDs but I also believe that the people who ran the Cubs and ran baseball knew that he and many of the game's other marquee players did.

The Ricketts family didn't own the Cubs back then but it inherited the franchise's history.

Let's assume that the current and planned construction occurring around Wrigley Field will include a Cubs hall of fame some day.

Inductees will be players from Three Finger Brown to Hack Wilson to Ernie Banks to Ryne Sandberg … all the way up to futures like Kris Bryant, Anthony Rizzo and Addison Russell.

Could the Cubs possibly have a hall of fame without Sammy Sosa? Could he be inducted but not invited? How awkward would that be?

Except for 1998 when a baseball was featured, Sosa was on the cover of every Cubs information guide from 1997 through 2004 either by himself or with others.

My personal favorite was 2003, when Banks and Sosa shared the cover while leaning on their home-run bats.

This isn't my family room we're talking about, it's the place many considered to be Sammy Sosa's house for nearly a decade.