If released, Jamaal Charles could be intriguing option for Eagles

With needs at several positions but not much money to go around, the Philadelphia Eagles will need to get creative this offseason as they build their team.The Eagles currently have just under $10 million in cap space, per OverTheCap. They are expected to... 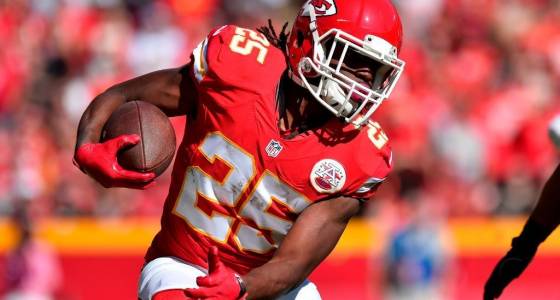 With needs at several positions but not much money to go around, the Philadelphia Eagles will need to get creative this offseason as they build their team.

The Eagles currently have just under $10 million in cap space, per OverTheCap. They are expected to make several moves before the league year opens March 9 to free up resources but still won't be in a position where they can afford to go too crazy in free agency. It seems reasonable that executive vice president of football operations Howie Roseman and company could make one splash signing (wide receiver?) then wait for the second wave and search for lower-cost players to help bolster the roster.

The market will only grow over the next couple weeks as teams make salary cuts. One name worth pondering if he shakes loose is Kansas City Chiefs running back Jamaal Charles. The 30-year-old veteran is set to count more than $6 million against the cap in 2017. The Chiefs, who only have about $5 million in cap space at the moment, just signed C.J. Spiller on Friday, fueling speculation that Charles might be on the move.

Charles' recent injury history has to be considered. He tore his right ACL in 2015 and missed the majority of this past season as well after undergoing surgery for a meniscus tear. He also tore his left ACL in 2011.

When healthy, Charles has been dynamite. He has rushed for over 1,000 yards five times since being drafted in the third round by the Chiefs in 2008, averaging an eye-popping 5.5 yards per carry along the way with 43 touchdowns. He is also a receiving threat out of the backfield, catching 70 balls for close to 700 yards with seven touchdowns in Andy Reid's first year with the Chiefs.

Eagles head coach Doug Pederson was Charles' offensive coordinator for three seasons in Kansas City. Safe to say, Charles is a fit for the system Pederson brought to Philadelphia, which is similar to the one Reid runs in Kansas City.

The Eagles need to add to their backfield. Ryan Mathews suffered a neck injury late last season. The expectation is that he will not be back with the team in 2017. That leaves second-year back Wendell Smallwood and the 33-year-old Darren Sproles as the two main holdovers. While both have value, it would be wise to bring in additional firepower.

As it stands, the Eagles have big holes at cornerback and wide receiver, and could use a boost at running back and along the defensive line, for starters. The team will try to address those areas this offseason. Charles would likely not command a large payday given the injury concerns but has home-run potential if the knees hold up. That could make him an intriguing option should the Chiefs let him walk.