How Yankees' Luis Severino showed what he's been missing -- briefly

TAMPA -- Luis Severino knows he can't be that way again.  Yankees' Luis Severino faces hitter "You can't be a starter with two pitches," he said. On Sunday, the 22-year-old took his first big step toward making himself complete in Sunday's... 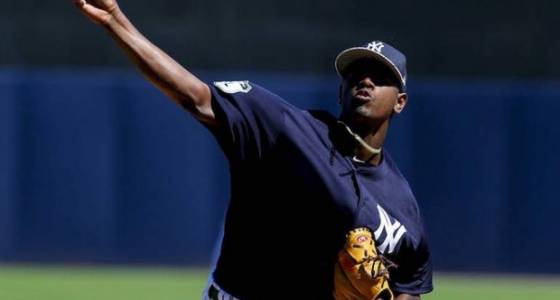 TAMPA -- Luis Severino knows he can't be that way again.

"You can't be a starter with two pitches," he said.

On Sunday, the 22-year-old took his first big step toward making himself complete in Sunday's 7-2 win over the Blue Jays at George M. Steinbrenner Field.

Severino, a righty, pitched two scoreless frames. Incorporating a changeup that the Yankees have emphasized big-time into his fastball-slider repertoire, he walked one and struck out one. It was his initial outing of this year's spring training.

"I feel good," he said. "My changeup was good. I threw a couple of good changeups over there."

Here are a few takeaways from Severino's outing:

3 Yankees hitters who have stood out most

The changeup's performance: Severino didn't know exactly how many changes he threw, but whatever the number was, it must have been way more than he did in 2016, when he went 0-8 with an 8.50 ERA in 11 starts. Manager Joe Girardi said it was better than it had been.

"I was happy with what he did today," Girard said. "You want to try to stay away from walks right away in spring training and get them to throw strikes. He used his changeup. He had an out on a changeup. I thought it was good."

The changeup's importance: Take it away, Joe:

"I think it's a big pitch for him," Girard said. "He used to have a really, really good changeup and he kind of lost it a little bit. But today he was committed to it."

Severino lost 10 pounds in the offseason and worked with his pitching coach in the Dominican Republic -- at the request of pitching coach Larry Rothschild -- on repeating his release point. Severino has said that he was all over the place with each of his pitches last year, releasing the fastball and slider too wide at times and occasionally turning over his wrist while throwing the changeup.

"I think that's my most important pitch. Not for me, but for anybody," he said.

The competition: Severino is facing off against four other Yankees right-handers for the Nos. 4 and 5 rotation spots. Adam Warren, Bryan Mitchell and Luis Cessa have pitched well so far, none of them giving up a hit. Chad Green will start on the road against the Orioles on Monday.

Asked about the competition, Severino said, "I'm competing with myself. I'm trying to be better than last year."