How an underdog basketball team continues to inspire ... 40 years later

Cedric Maxwell remembers it all, the tastes and smells nearly as much as the nervous energy and excitement surrounding the Charlotte 49ers men’s basketball team on its way to the 1977 Final Four.Forty years removed, those memories are just as fresh.“When... 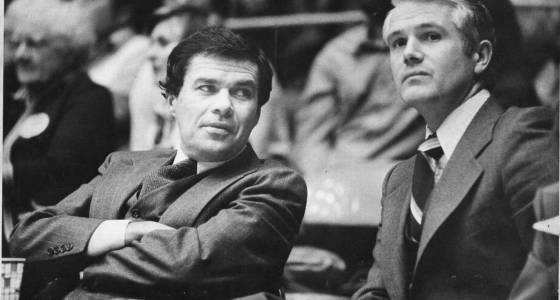 Cedric Maxwell remembers it all, the tastes and smells nearly as much as the nervous energy and excitement surrounding the Charlotte 49ers men’s basketball team on its way to the 1977 Final Four.

Forty years removed, those memories are just as fresh.

But this Saturday, Maxwell will join his former teammates and coaches at Halton Arena, where the 49ers will celebrate their lone Final Four team’s 40th anniversary during the annual alumni game (3:15 p.m.) and the current team’s game against Marshall (6 p.m.).

“For them to come back, I hope our guys know their history and they understand what a big deal that was and what a great accomplishment it was,” coach Mark Price said. “(I hope) to use that as motivation for what we want to get this program back to.”

The 1976-77 team, playing in just its seventh NCAA Division I season, had no such precedent.

But the 49ers’ newcomer status didn’t deter coach Lee Rose. After replacing Bill Foster in 1975, Rose sought to improve Charlotte’s schedule. He scheduled games at Maryland, Texas Tech and N.C. State during the 1975-76 regular season, which the 49ers finished with a 21-5 record.

The 49ers received the final bid before upsetting San Francisco, Oregon and N.C. State on the way to the NIT final before losing to Kentucky.

“We thought we were good, and we knew we could play,” Maxwell said. “But we didn’t know we were really that good until (Rose) kind of led us into the NIT.”

Charlotte returned four starters, including Maxwell, for the 1976-77 season, its first in the Sun Belt conference. Freshman guard Chad Kinch assumed the final starting spot, and the team posted a 25-3 record en route to the conference title and a bid to the 32-team NCAA tournament.

After an overtime win against Central Michigan in the first round, the 49ers upended Syracuse and Michigan to reach the Final Four in Atlanta. North Carolina, UNLV and Marquette, their national semifinal opponent, joined them.

Charlotte trailed early against Marquette before tying the game at 49 with three seconds remaining. It wasn’t enough to force overtime.

Marquette’s Jerome Whitehead caught a length-of-the-floor pass, reaching over Maxwell without being called for a foul, and made a layup. The officials determined the basket came before the buzzer, and Marquette won 51-49 before defeating North Carolina 67-59 in the championship game.

“As we walked off the court, there was a coach standing, getting ready to bring his team on the floor,” said Rose, 80. “He said to me as I walked by, ‘Your kid got fouled on that play.’ That man’s name was Dean Smith. That always kind of stuck with me.”

Maxwell, who led all players with 123 points during the NCAA tournament, was selected the Boston Celtics with the No. 12 overall pick in the NBA draft that June. He won two NBA titles with the Celtics and was the MVP of the 1981 NBA Finals.

Yet, he said the memory of that final play against Marquette still lingers.

“I would give a championship back or a Finals MVP if I could have just played in that final game against Carolina,” said Maxwell, a Kinston native. “That is what I ultimately wanted for our team, for our city and for our fans. I think they deserved it.”

The Final Four team brought newfound attention to the university. However, in many ways, the 49ers keep chasing a return to the national stage after its ensuing trips to the NCAA tournament didn’t extend past the second round.

“Maybe it’s like somebody playing golf and they hit a hole-in-one,” Rose said. “They cherish that moment, but then they never have another hole-in-one.”