DUNEDIN, FLA.—A more recognizable Toronto Blue Jays team could take the field here by week’s end, but it might be a while before fans get a taste of the kind of lineups that will play come the regular season. Fans in Florida have already had... 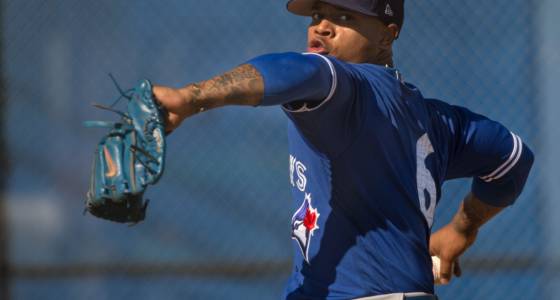 DUNEDIN, FLA.—A more recognizable Toronto Blue Jays team could take the field here by week’s end, but it might be a while before fans get a taste of the kind of lineups that will play come the regular season.

Fans in Florida have already had a taste of Russell Martin, Jose Bautista and Kendrys Morales over the course of Toronto’s first three spring training games,

Another big name — pitcher Marcus Stroman — will make his preseason debut on Monday when he starts against the Pittsburgh Pirates.

Fans could also see the likes of Roberto Osuna in the afternoon game.

When it comes to the bigger names, the rest of the starting rotation — and Troy Tulowitzki to make their debuts.

Gibbons expects to put the shortstop in next Saturday; the others will play “pretty soon.”

Holding them back was by design, Gibbons said; he would have done the same with third baseman Josh Donaldson had he not suffered a calf strain. The delayed starts are thanks to the long spring training and back-to-back years with playoff runs deep into October.

“It’s a long year. Guys like that play every day,” he said.

Thanks to that hold up and the World Baseball Classic — which starts next week and will draw players away from the Blue Jays fold as soon as the end of this week — different players are on different timelines. Some, like Bautista and Stroman, are revving up in preparation for the international tournament.

Fielding a full-strength lineup is going to have to wait.

Toronto is looking for its first win since kicking off this year’s Grapefruit League campaign on Saturday.