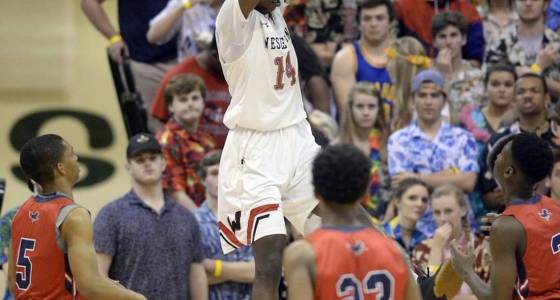 ↑Private school coaching: Nine of the 12 boys semifinal coaches in the NCISAA 1A, 2A and 3A playoffs have won state championships. Six have won multiple titles.

Janelle Bailey, Providence Day: 23 points, 18 rebounds for the McDonald’s All-American in a 51-22 win over Rabun Gap.

David Caraher, Jaylen Hoard, High Point Wesleyan: Caraher, the state’s No. 16-ranked senior headed to Houston Baptist, had 29 points and 10 rebounds in an 75-69 win over Providence Day. Hoard had 20 points and seven rebounds.

Devon Dotson, Trey Wertz, Providence Day: Dotson had a game-high 32 points, four rebounds and three assists against Wesleyan. Wertz scored 18 of his 19 points in the second half after suffering a pretty tough left ankle injury in the first half. He added a team-high five rebounds, plus three assists and had a pronounced limp after the game.

Carmel Christian 79, Concord First Assembly 76: Coach Byron Dinkins led his Cougars to the state championship in his first season there, winning a close semifinal behind 25 points from sophomore Donovan Gregory, 17 from sophomore Myles Pierre, 14 from sophomore Marten Maide and 13 from senior Shawn Morrison. Carmel will face Village Christian in Saturday’s 8 p.m. state final. Several of the Cougars were part of Dinkins’ Northside Christian team that lost to Village Christian 59-52 in the 2016 state 2A final. Stephen Edoka led CFA with 23 points.

Fayetteville Village Christian 82, Gaston Day 80: Village Christian, the reigning state champion, had to play its semifinal on Gaston Day’s homecourt, but withstood the emotion of a big crowd and a strong performance from McCluney and Hinton to advance to Saturday’s state championship game against Carmel Christian. DaKari Johnson had 26 for Village and Jordan Ratliffe had 24. Gaston Day missed a flurry of free throws late, including two that could’ve tied the game with 4.9 seconds left -- and a short put-back attempt after the second free throw missed.

Greensboro Day 68, Cannon 49: Nationally ranked Greensboro Day (32-3) jumped out to a 22-9 first quarter lead in its semifinal and wouldn’t let up. Solomon Smith and Jordan Perkins had 13 points for the Bengals, ranked No. 11 nationally by MaxPreps and No. 23 by USA Today. Pearce Landry added 12 and John Newman had 11. Cannon got 19 from Jairus Hamilton but no other Cougar scored more than nine. Greensboro Day will face rival High Point Wesleyan (28-4) for the state championship Saturday at noon at Charlotte Latin. If the Bengals win, they could also win a trip to New York for the DICKS’ National Championship that Providence Day played in last year. Also, Greensboro Day beat Wesleyan twice this season -- by a combined seven points.

High Point Wesleyan 75, Providence Day 69: With coaches from Creighton, Florida, Florida State, Ohio State, Tennessee, Virginia and Wake Forest in the stands, Providence Day (23-11) trailed by four at halftime, but rallied behind eight straight points from Wertz to gain an advantage in the third quarter. After that, the Chargers -- who got 11 points and five rebounds from junior Isaac Suffren -- appeared to tire under the relentless assault from Wesleyan’s bigger front line. Carraher and Hoard scored at will inside, and the Chargers’ shots didn’t fall late. Wesleyan advanced to Saturday’s noon championship game at Charlotte Latin School and will go for its first state title since winning back-to-back championships in 2013 and 2014.

Providence Day 51, Rabun Gap 22: Providence Day (24-4) led Rabun Gap 14-11 after the first quarter and held Rabun Gap to 11 points for the rest of the game. The Chargers will try to win their eighth straight state championship Saturday at 10 a.m. at Charlotte Latin School, facing High Point Wesleyan (24-6). Providence Day -- which has won 105 straight conference games -- has won 12 of the past 13 state championships and 16 overall. The school has produced two McDonald’s All-Americans -- Jatarie White (2014) and Janelle Bailey (2017) -- in the past three seasons, and Charger girls have won four of the past five Gatorade N.C. player of the year awards (Tiffany Mitchell 2012, White 2013-14, and Erin Whalen 2016). Bailey is the front runner to win it this season.