Over the last 29 days of the Iowa State season in 2016, as Jacob Park seized control of the offense, he completed 92 of 152 passes for 1,322 yards and eight touchdowns, with three interceptions -- comparable to the production of Brad Kaaya, Jake Browning... 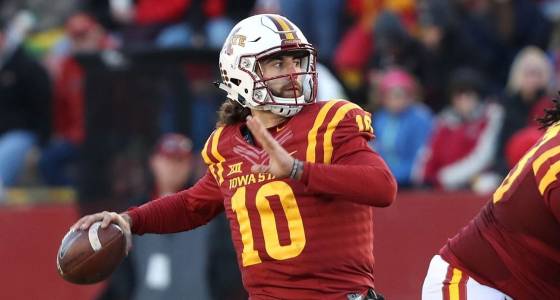 Over the last 29 days of the Iowa State season in 2016, as Jacob Park seized control of the offense, he completed 92 of 152 passes for 1,322 yards and eight touchdowns, with three interceptions -- comparable to the production of Brad Kaaya, Jake Browning and Mason Rudolph and better than J.T. Barrett, Deondre Francois and Sefo Liufau.

Now consider that Park, once an early enrollee at Georgia and an Elite 11 finalist, did not play football for the two seasons prior.

By his own description, he suffered a dramatic fall from grace. Now a fourth-year junior with three starts under his belt, Park appears on a trek upward at unlikely destination for this former top-100 national recruit out of SEC country.

Twelve months before Park engineered consecutive Big 12 wins last November by completing 77.2 percent of his throws for 490 yards, he was chucking passes in church-league flag football at home in South Carolina while enrolled in courses at a technical school.

Six months before he threw for 301 yards in his first collegiate start (a five-point Iowa State loss to Kansas State in October), Park was working out in the spring at Northeastern Oklahoma A&M, for which he never played a down.

And one month before his September debut against Iowa, Park, already lagging behind veteran teammates because of his late arrival in Ames, missed the first week of fall practice while recovering from the mumps.

The only constant for Park, whose experience in 18 months at Georgia hardened his perspective on college football? A passion for his position.

The problem, dating to the start of his time at Georgia in January 2014, Park said, involved his willingness to accept coaching, to understand the process necessary to succeed as a Power 5 quarterback and to handle adversity.

“He’s still raw in a lot of ways,” Iowa State coach Matt Campbell said. “But what you love is his willingness and his want-to. He loves football and has a great passion for the game.”

Park represents the best hope for Iowa State to jump from three wins last year to bowl eligibility in Campbell’s second season. The Cyclones open spring practice on Tuesday, the pacesetter among Big 12 teams, with a reformed and refocused quarterback, who meshed with the ISU coaches immediately in the weeks before signing day a year ago.

The connection they forged helped to save Park's career.

To get there, though, he traveled an arduous path.

He committed to Georgia in June 2013. The No. 93 prospect nationally and fourth-ranked dual-threat quarterback with offers from Alabama, Florida State and Notre Dame, Park appeared a suitable heir to Aaron Murray, whose UGA career wrapped as Park led Goose Creek (S.C.) Stratford to the Class AAAA Division II state championship game and took the title of Mr. Football in his home state to the U.S. Army All-American Bowl.

After his first spring at Georgia, Park redshirted behind Hutson Mason, Brice Ramsey and Faton Bauta. The departure to Colorado State of offensive coordinator Mike Bobo preceded a second spring for the quarterback without movement on the depth chart.

Park said he questioned training methods, coaching decisions and the impact of work away from the field on his progress.

“I just don’t think my personality and their personality went together,” Park said of his time at Georgia. “I never was cocky or arrogant or thought I had all the answers, but I definitely wasn’t as open-minded as I thought I was.”

More than that, he got frustrated easily and failed to handle the scrutiny of living under a spotlight.

“People think your life’s perfect because you play quarterback at a major university, but they have no idea how many eyes are on you at all times,” he said. “That was a weird time in my life. My trust in the whole business of football was really killing my love for the game.”

Shortly after quarterback Greyson Lambert transferred to Georgia in June 2015 from Virginia, Park left Athens. He examined a few juco options but settled on Trident Technical College near home in Charleston, South Carolina. Football of the intercollegiate variety was not an option in the fall of 2015.

Enter Clay Patterson, hired at Northeastern Oklahoma from Trinity Valley (Texas) CC in December 2015. He learned of Park and signed him right away as a reclamation project. But before Patterson got a football into Park’s hands, Campbell -- newly hired at Iowa State -- stepped in.

In his first week on the job, Campbell said, he and recruiting coordinator Alex Golesh identified Park as a target. Iowa State needed QB depth, despite bringing back Joel Lanning as a five-game starter from 2015 who threw for 1,247 yards and 10 touchdowns.

Park bonded with Campbell in a phone conversation before Christmas. He made an official visit to Iowa State in January and enjoyed meeting with passing game coordinator Jim Hofher.

“It was really obvious this guy loves football,” Hofher said. “He knew what he was looking at. He had the right idea and all the right questions to ask.”

Park signed with ISU but stayed at the Oklahoma junior college to pursue his associate’s degree. Before he graduated in June 2016, Park went through spring practice with Patterson. He skipped scrimmages but otherwise stayed sharp and worked on principles that would translate to his next stop in the Big 12.

“I just told him I was going to take a lot of pride in getting him ready to play for Iowa State,” Patterson said, “because the way he plays is going to be a product of our system.

“What he did is very difficult. But that’s the kind of kid Jacob is. He’s going to find a way to be successful. And he’s going to be an NFL quarterback if he keeps his head on straight.”

At 6-foot-4 and 205 pounds, Park possesses the tools to make it. Despite his dearth of experience, he took the starting job from Lanning late last season, largely playing on athletic ability.

Lanning also returns as a senior in 2017. And though Park enters spring as the clear No. 1 quarterback, both will play -- with Lanning, a dangerous runner, likely to fill multiple roles.

The Cyclones expect to see notable improvement from Park over his 2016 performance, which yielded 1,791 yards on 58.9 percent passing.

“Night and day is probably putting it lightly,” Campbell said of the difference in Park’s readiness from last August.

The experiences at Georgia and elsewhere, Park said, were “the best thing that ever happened to me.”

Today, he embraces the early morning workouts he used to despise.

“As a person, I’ve taken tremendous strides,” Park said. “As a football player, I’m much more dialed in and controlled. The stuff that coach Patterson preached to me when I was [at NEO] and that coach Campbell continues to preach to me here, I don’t know if it’s the first time I’ve heard it or if I’m just a better listener, but it all makes sense now.

“There’s no pointless conversations with anybody. My life makes sense for me.”