Dwight Howard pushes and trolls his way to strange night

Dwight Howard’s night ended early Monday against the Boston Celtics, but at least it was interesting while it lasted.The Atlanta Hawks center took exception to a hard foul in the third quarter from Celtics center Al Horford, who grabbed onto Howard’s... 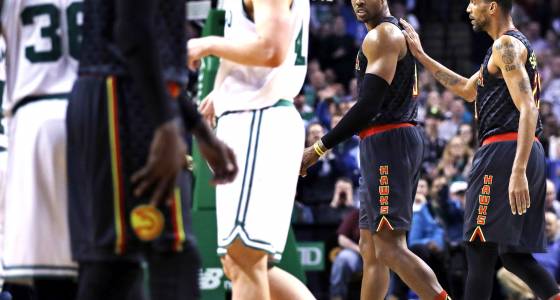 Dwight Howard’s night ended early Monday against the Boston Celtics, but at least it was interesting while it lasted.

The Atlanta Hawks center took exception to a hard foul in the third quarter from Celtics center Al Horford, who grabbed onto Howard’s arm as he attempted to dunk. Howard got back to his feet and pushed Horford, who began to yell at Howard and needed to be restrained.

Howard was assessed a technical for the push and remained in the game. That wouldn’t last.

A little more than five minutes after the scuffle, Howard was hit with his second technical after he excessively hung onto the rim after a dunk. He was immediately ejected, which the league later said should not have occurred.

Howard was having a big game up to that point, finishing with 17 points and 12 rebounds in just 27 minutes. He ended his night by faking out a Celtics fan who was asking for his jersey.

Dwight you're cold for this.