Does Mets' Lucas Duda's injury open the door for David Wright at first base?

PORT ST. LUCIE, Fla. -- There were new first basemen added to the list daily in the early weeks of Mets spring training this month. There was plan A, B, C, D and plan apocalypse. And it's a good thing they had all of those plans, because the Mets... 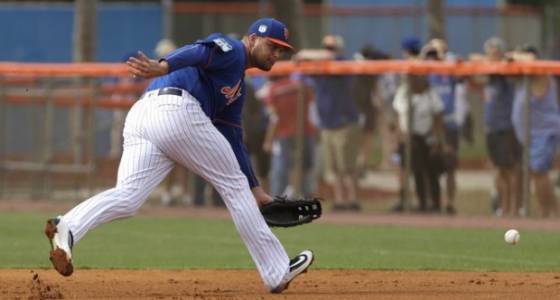 PORT ST. LUCIE, Fla. -- There were new first basemen added to the list daily in the early weeks of Mets spring training this month. There was plan A, B, C, D and plan apocalypse. And it's a good thing they had all of those plans, because the Mets will have to implement one, if not more, earlier than expected, since Lucas Duda is once again having hip and back problems and is unable to play at the moment.

Duda hasn't worked out with the team in three days. Manager Terry Collins had previously said that he would not make the trip to Ft. Myers to play the Red Sox in Friday's Grapefruit League opener, but he wasn't in the lineup on Saturday against the Nationals because of cortisone injections in his hips.

Duda began to feel pain in his back earlier this week after taking extra work during practice. The following day, his hips began to bother him. Last season, Duda had a stress fracture in his lower back that shut him down for most of the season, and Collins isn't sure if this injury is related or not.

So, now what? Even if Duda is healthy by opening day, his back has proven to be more fragile than reliable.

Wilmer Flores played first on Saturday before prospect Dominic Smith took over. Smith is, by all indications, not ready to play at the big league level. Even he said he's excited about the opportunity to move up a level to Triple-A. The Mets don't want to rush one of their most talented prospects.

There's been talk of David Wright moving from third base to first. A lot of talk with little action, because he's still not throwing every day. But it may not be just chatter for much longer.

"I think we've got to wait to see how he throws," Collins said. "But the answer to that is, yes, I think there's a possibility that when he starts taking grounders, we flip him over and let him take some at first also."

At the moment, the job is Flores'. But Collins said second baseman Neil Walker and right fielder Jay Bruce would also be taking ground balls there in the upcoming days. Putting Bruce at first would open up a spot for Michael Conforto to show that he has his big league swing back.

Collins said it's concerning, especially because just five days ago he felt fine, but it's become apparent that all of those backup plans need to be put into effect now.

"We're very fortunate that we've got a lot of camp left," Collins said. "A ton of camp left. We'll be able to assess it as we go."