The Washington Redskins placed the exclusive franchise tag on quarterback Kirk Cousins on Tuesday.Cousins received the non-exclusive tag last year. It's the first time in history a team has used the franchise tag twice on the same quarterback.He reacted... 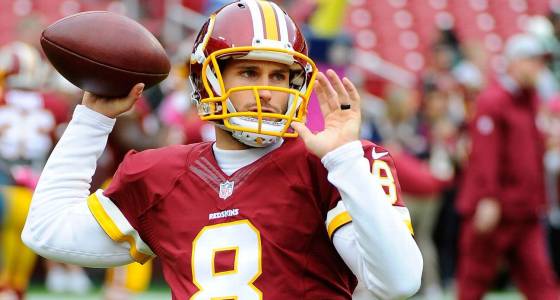 Cousins received the non-exclusive tag last year. It's the first time in history a team has used the franchise tag twice on the same quarterback.

Because it's the exclusive tag, Cousins can't negotiate with other teams. The Redskins can still trade the quarterback, if they choose to, but in that scenario the Redskins would have to grant Cousins permission to talk to other teams and work out a long-term deal before a trade likely would be completed.

If he were to be traded, Cousins' preferred destination is the San Francisco 49ers, according to a source close to the quarterback, as he loved playing for new 49ers coach Kyle Shanahan when he was the Redskins' offensive coordinator and really likes his system.

The Redskins can negotiate with Cousins on a long-term deal until July 15. At that point, there can be no deal struck until after the Redskins' season. Cousins will make $23.94 million under the tag.

Kirk Cousins is the first quarterback in NFL history to receive the franchise tag in back-to-back seasons.

Cousins helped guide the Redskins to the postseason in 2015 after a sluggish start in which he had six touchdowns and eight interceptions in his first six games. In the final 10 games, with his yell of "You like that?!" going viral after being caught on camera, Cousins threw 23 touchdown passes to just three interceptions as the Redskins went 7-3 en route to a 9-7 finish and the NFC East title.

The Redskins used the franchise tag -- at a cost of $19.953 million -- to keep him around for 2016. Cousins responded with yet another solid season in which he threw for a career-high 4,917 yards with 25 touchdown passes and 12 interceptions as the Redskins finished 8-7-1 and failed to make the playoffs.

Cousins was drafted in the fourth round in 2012 to be the backup -- and insurance policy -- for Robert Griffin III, who was taken with the second-overall pick that year. He started four games his first two seasons, one as a rookie replacement for an injured Griffin.

In 2013, Cousins started the final three games as the team benched Griffin, saying they wanted him healthy to work out in the offseason.

Cousins' first extended shot at taking as the starter occurred in 2014 when Griffin again was injured. But in five games, including four starts, Cousins was inconsistent as he posted just two games with a total quarterback rating above 81 - and two that were less than 12. He was subsequently benched and did not play after Week 7.

He won the starting job the following August, after another Griffin injury opened the door in the preseason. Cousins has made 33 starts since, including one playoff loss after the 2015 season.