LOS ANGELES >> Draymond Green’s verbal jabs at Paul Pierce during the Warriors’ 123-113 win Thursday stayed with Clippers forward long enough for him to tweet an acerbic response at 2:04 a.m. Friday. By Friday evening, Pierce was downplaying... 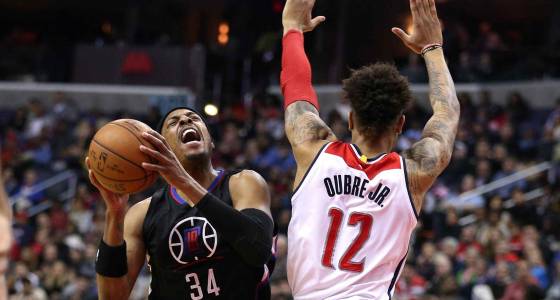 LOS ANGELES >> Draymond Green’s verbal jabs at Paul Pierce during the Warriors’ 123-113 win Thursday stayed with Clippers forward long enough for him to tweet an acerbic response at 2:04 a.m. Friday.

By Friday evening, Pierce was downplaying the exchange that began when the Warriors forward told him loud enough for the TNT broadcast to pick up the audio: “Chasing that farewell tour. They don’t love you like that. ... You thought you was Kobe?”

Pierce, who announced before the season that this would be the final of his 19 years in the NBA, was on the bench when Green began taunting him less than 20 seconds into the game.

“That wasn’t no beef,” Pierce said before Friday’s game against the Spurs. “I ain’t got no beef in the NBA. I’ve already settled all my beefs. That’s just good banter, you know. That’s all it is, good back and forth.”

Pierce, who is averaging just 3.7 points in 13 games this season, did not play Thursday against the Warriors. Green was along the side of the lane while a free throw was being shot when he began yelling in the direction of Pierce.

The Clippers forward responded with a tweet Friday morning that referenced the Warriors’ 2015-16 season that ended when the Cleveland Cavaliers erased a 3-1 series deficit in the NBA finals to defeat the team that set an NBA record with 73 regular-season victories. It read: “73 wins and u thought u was gonna win a title that yr...3-1 lead oops.”

Clippers coach Doc Rivers wasn’t worried about Chris Paul being in shape for his return from the torn ligament in his thumb that shelved him for 15 games.

“He was running I want to say three days after surgery,” Rivers said. “So, it’s still not running against Kawhi Leonard and that group. But he’s been able to play. We did have two good practices where we did a lot of up and down, so I think that helped.”

Paul was the one expressing concern, but not for himself. The Clippers’ point guard approached Rivers before Friday’s game to voice his apprehension about interrupting the elevated play of Austin Rivers. He implored his coach to tell the point guard to stay aggressive despite Paul’s presence reducing his role.

“I said, he’s standing right there. You can go tell him,” Doc Rivers said. “It’s better for a player to tell a player that.”