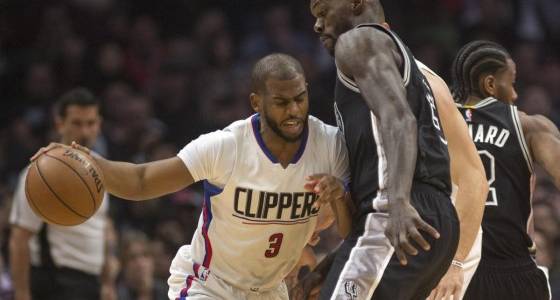 He didn’t want to rattle off any more issues presented by his surgically repaired left thumb.

“Man, there’s no excuses,” the Clippers point guard said. “I’m going to figure it out.”

There were plenty of ways to explain the Clippers’ 105-97 loss to the Spurs on Friday night at Staples Center.

Paul’s return from a 14-game absence was one. It being the second night of back-to-back games against the teams with the top two records in the league was another.

Friday was just the 27th game this season Paul and Blake Griffin have played together. The Clippers have won 35 of their 58, making San Antonio and Golden State difficult to see from their vantange point in fifth place in the Western Conference.

Griffin finished with 29 points, nine rebounds and five assists. Paul had 17 points, five assists and four turnovers in 32 minutes, going 6 for 14 from the field.

But even when they helped the Clippers to a nine-point lead late in the third quarter, it just didn’t feel right.

“We still didn’t play good offense. I’m never going to be fooled by that,” Clippers coach Doc Rivers said. “We missed some great shots down the stretch, wide-open threes. And honestly when everything’s going well, it’s a close game, it’s a one-point game. But we still weren’t playing good offense.”

Paul was medically cleared to play on Wednesday, but he sat out the Clippers’ 123-113 loss at Golden State on Thursday. The second game of the league’s most difficult back-to-back provided an opportunity to see the difference in the Clippers with their floor leader.

Paul hit the game’s first shot and scored 10 points in the first half, but he didn’t make a field goal in the fourth quarter.

“You have to figure out how to play without (Paul) while he’s not there and you get into somewhat of a groove,” Griffin said. “Obviously, that groove is not as good as if we had him. ... I don’t think it was that big of a thing because we had two days of practice and, like I said, he’s pretty easy to play with.”

On a night the Clippers returned to full strength, the game was ironically decided with the Spurs’ best player on the bench.

Griffin scored 12 of his 29 points in the first eight minutes of the third quarter, but perhaps the most important thing he did in the rollercoaster period was draw a fifth foul on Kawhi Leonard. The Spurs’ All-Star forward finished with 21 points and six assists in 31 minutes, but sat for a nine-minute stretch that bridged the third and fourth quarters.

The Clippers’ took their largest lead of the game with 4:22 left in the third. By the time Leonard returned early in the fourth, his team had completed a 22-5 run and taken an eight-point lead.

“I just thought it came down to a fight in the second half,” Griffin said. “I thought we had a stretch of five minutes or so when we didn’t execute ... and when you play a team like them, it’s death.”

Austin Rivers scored 15 of his 25 points in the first half and all eight of the Clippers’ bench points in the second half. Jamaal Crawford and Raymond Felton were held scoreless, shooting a combined 0 for 4 from the field.

Rivers played a key role in the first half, but the bench players were on the floor for the latter part of the Spurs’ decisive run.

After allowing 50 points to the Warriors in the third quarter Thursday night, the Clippers essentially lost on Friday during the same portion of the game.

“It’s funny how the game goes. In the first half, the bench got the lead for us,” Doc Rivers said. “In the second half, it was already going down and it exploded on us.”

Doc Rivers was pleased with the Clippers’ defense, which held the Spurs to 43 percent shooting. San Antonio did manage five players in double figures, including two who came off the bench.

Paul and Griffin have combined to miss 41 games this season, but it was DeAndre Jordan who was missing in action in the first half. The Clippers center had just two rebounds before the break and didn’t score his first basket until nearly two minutes into the third quarter. He finished with 14 points and eight rebounds, but the Clippers never found a rhythm on the offensive end.

“There’s no excuses,” Paul said. “This was our first game with everybody. I probably threw some guys off, but we’re going to figure it out.”