LITTLE FALLS -- The Jets aren't going into next season with just Bryce Petty and Christian Hackenberg at quarterback. They're going to add a veteran to the mix. Potentially, a proven starter.  Good QB options for the Jets: Boomer says, 'Alex... 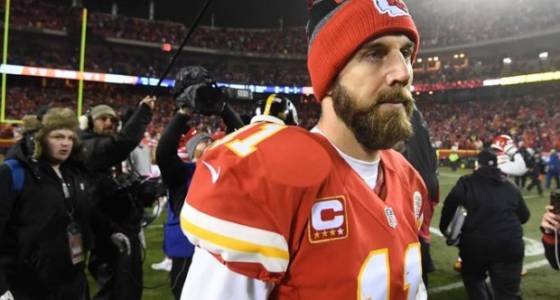 LITTLE FALLS -- The Jets aren't going into next season with just Bryce Petty and Christian Hackenberg at quarterback. They're going to add a veteran to the mix. Potentially, a proven starter.

Former NFL signal caller and current WFAN host Boomer Esiason has an idea who the guy should be. Even if it's not the sexy pick.

Of all the names associated with the Jets, Smith's has rarely been uttered. Possibly because he still has two years left on his contract, and the Chiefs aren't actively shopping him. But there have been rumblings of coach Andy Reid's interest in Cowboys quarterback Tony Romo.

The Jets got an extra NFL draft pick

If the Chiefs get Romo, Smith becomes expendable. And that's when the Jets should pounce, according to Esiason.

"He can handle the crap if he has to," Esiason said. "He would be a very steady influence and somebody who is in the midst of his prime. And he knows the West Coast offense. I'm assuming that's what [new offensive coordinator] Johnny Morton is going to be running?

"There's no way Bryce Petty and Christian Hackenberg are going to be ready for that. They're just not ready for it. Alex has, obviously, played his entire career in it."

Smith, statistically, is one of the league's more efficient passers. He has had a quarterback rating over 90 and a completion percentage above 65 each of the last three seasons. But a further dive into the numbers shows he isn't lighting it up.

In his 12-year career, Smith has never thrown more than 23 touchdowns. He doesn't throw many interceptions (single digits in every season since 2010), but rarely takes risks. He is 41-20 in his last 61 starts, but 1-2 in the playoffs.

Every Jets offseason move so far

Kansas City's reportedly interested in Romo because they don't believe Smith can get it done. Esiason doesn't believe this should scare off the Jets.

"He's just cautious," he said. "He's a cautious player. He's a smart player. And you know what? If Ryan Fitzpatrick were a little bit more cautious last year, they wouldn't have lost as many games as they did. So there's nothing wrong with being cautious. It's just not going to get you to the promised land. That's for sure.

If not Smith, Esiason could see the Jets adding a player like the Bucs' Mike Glennon. He does not believe, under any circumstance, they should sign Colin Kapernick (49ers) or Jay Cutler (Bears).

"You have a new offense, new offensive coordinator, a coach that's going to be riding the players, because he just basically got embarrassed this year by some of his star players," Esiason said. "I just think that those two guys are not guys that would fit the New York scene.

"But I've been wrong before. I just don't think I would be wrong here, though."

Which NFL teams have the most cap space?

Esiason's foundation hits close to home. His son, Gunnar, has cystic fibrosis. But he now lives a productive life, coaching high school football and hockey on Long Island, after being diagnosed at age 2, in 1993.

"One of the things our foundation really promotes for CF families is activity. Don't sit at home. Don't sit on your hands. Get out and run, skate, bike. Do something that you love to do physically, whatever it may be.

"But just go out and participate and clean those lungs out as best you can. It's been an unbelievable 20 or so years that we've done this. We've raised over $130 million. We've given $4 million away in scholarships to CF patients all across the country."