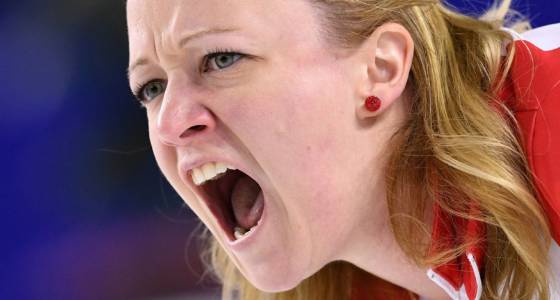 ST. CATHARINES, ONT.—Chelsea Carey goes home from the Canadian women’s curling championship with a bronze medal and a vacancy on her team.

Third Amy Nixon said Sunday’s 7-4 win against Northern Ontario’s Krista McCarville for bronze was the last game of her career at the Scotties Tournament of Hearts.

Nixon, 39, won the 2016 Canadian title with Carey and an Olympic bronze medal in 2006 with Shannon Kleibrink. She’s competed in six Canadian championships as vice for both Kleibrink and Carey.

Even top curlers can see their game slip and slide away

“I’ve known for awhile this year that it’s just not a possibility for me to maintain what I’ve tried to do in the game,” Nixon said.

“I still love to compete and I love those girls, but I don’t like the grind anymore. I don’t have the fire for it. There’s other things that call on my time.

“I’d rather go skiing with my family and I’d rather bake cookies. I have a great job that I really enjoy and my career is taking off in a really productive way.”

Nixon’s announcement was sudden. She acknowledged she hadn’t talked to her teammates about her decision, so Carey wasn’t yet thinking about a replacement.

Nixon, a lawyer, is married with a three-year old daughter and is a senior adviser to the president of Mount Royal University in Calgary.

“Amy’s a special player for sure,” Carey said. “She’s played so much third and she does it so well and knows what it takes from a shooting perspective, but more than that, from a team management perspective.

“Managing skips is not necessarily the easiest thing and she’s very good at it.”

Carey’s Glencoe Club team includes front end Jocelyn Peterman and Laine Peters. They don’t yet have one of the nine women’s berths in December’s Olympic trials in Ottawa.

They do have a spot in the pre-trials qualifier Nov. 6-12 in Summerside, P.E.I. The top two women’s teams from that tournament gain entry into the Olympics trials.

This year’s Team Canada as the defending champions, Carey went 9-2 in the preliminary round to secure the third playoff seed.

They lost 8-1 to McCarville in Saturday’s playoff between the third and fourth seeds to drop to the bronze-medal game.

“I’ve been on the podium in different positions and to do it with the Maple Leaf on my back is very, very special,” Nixon said.

“Our team was very motivated and all together today and that’s a very nice way to end.”