CaptionCloseWashingtonJustin Williams and Tom Wilson scored as the Washington Capitals beat the Edmonton Oilers 2-1 on Friday to tie the franchise record with their 13th consecutive home victory.Williams' game-winner in the third period was his 19th of the... 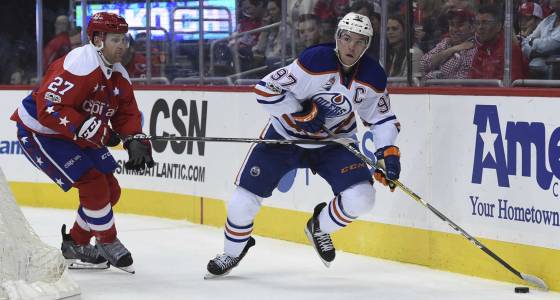 Justin Williams and Tom Wilson scored as the Washington Capitals beat the Edmonton Oilers 2-1 on Friday to tie the franchise record with their 13th consecutive home victory.

Williams' game-winner in the third period was his 19th of the season. Washington's streak of home games with five-plus goals ended at 11, but Braden Holtby made 30 saves to pad the team's lead atop the NHL.

Evgeny Kuznetsov didn't have a point but was arguably the Capitals' best player against Edmonton. They have now outscored opponents 64-20 during their home winning streak.

Leon Draisaitl scored his team-leading 23rd goal of the season for Edmonton, which got 24 saves from goaltender Cam Talbot.

Flames 4, Panthers 2: Chad Johnson made 36 saves during his first start in five games to lead Calgary to its third straight win. Troy Brouwer, Mikael Backlund, Deryk Engelland and Sam Bennett had the goals for the Flames, who scored three straight in less than five minutes midway through the first period.

Stars 5, Coyotes 2: Jamie Benn scored the tiebreaking goal in the third period. Jordie Benn sent a long pass to his brother at the left side of the net. Jamie Benn took the puck behind the cage and scored on a wraparound.

Notes: A supergroup of New York sports executives, including owners of the Rangers and Mets, is lining up to invest in a new arena just outside of Queens for the Islanders, according to sources. The Islanders play at Brooklyn's Barclays Center, though executives there have concluded that it's no longer worth it to host the hockey team, and the lease can be terminated as early as January. ... The Sabres returned from their bye week by recalling forwards Justin Bailey and Evan Rodrigues from the minors. Forward Derek Grant (shoulder) has been cleared to play and has been assigned to Rochester. ... The Blues agreed to terms on a $19.25 million, five-year contract extension with center Patrik Berglund. ... Hurricanes forward Bryan Bickell is expected to skate in his first hockey game since being diagnosed with multiple sclerosis, sending him to AHL affiliate Charlotte for Saturday's game. ... The Ducks acquired veteran forward Patrick Eaves from Dallas in exchange for a conditional second-round draft pick. ... Canucks defenseman Troy Stecher has been diagnosed with mumps and several other Vancouver players have shown symptoms.