The biggest heavyweight fight of 2017 is less than one month away when Anthony Joshua faces Wladimir Klitschko for the vacant WBA (Super) and IBO heavyweight titles at Wembley Stadium in London. Joshua and Klitschko will be fighting in front of roughly 90,000... 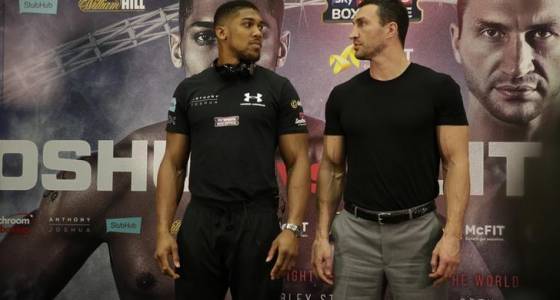 The biggest heavyweight fight of 2017 is less than one month away when Anthony Joshua faces Wladimir Klitschko for the vacant WBA (Super) and IBO heavyweight titles at Wembley Stadium in London. Joshua and Klitschko will be fighting in front of roughly 90,000 supporters, with most expected to be pulling for Joshua.

Joshua, who gained international attention for being a British-born gold medalist at the 2012 Olympics in London, is undefeated and looks poised to hold off the veteran Ukranian with his countrymen cheering him on in the iconic stadium. The 27-year-old only has 18 fights on his resume, with all victories coming by knockout. But the problem with Joshua's professional career is that most of his wins have been against weak competition.

Klitschko, 41, appeared to have won what was a painfully dull bout with Tyson Fury in November 2015, but the scorecards favored Fury in what turned out to be the famed champion's first loss in over 10 years. With the extended layoff and after the uninspired effort against Fury, there might be questions as to whether Klitschko can still compete at a high level at his age.

Waiting in the distance is Deontay Wilder, who could face the winner near the end of the year. The bruising American is 38-0 and coming off a fifth-round technical knockout in February over Gerald Washington, but was previously denied a big payday when his fight with Alexander Povetkin was canceled after the Russian tested positive for the banned substance meldonium. Wilder showed that he his still rather raw with windmill swings against Washington, but still wants to fight the highly polished Povetkin, who is still a serious contender with his 30-1 record.

In a very weak division, Wilder has done slightly better against relatively decent competition. Wilder has defeated Artur Szpilka, Johann Duhaupas, Eric Molina, as well as Bermane Stiverne. The four boxers had a combined career record of 101-7-1 entering their fights with Wilder.

What's interesting is what will happen in 2017 with some of the lesser-known heavyweights, who have somewhat weak competition awaiting them. Luis Ortiz (27-0) of Cuba faces Derric Rossy, while Joseph Parker (22-0) of New Zealand has a chance to climb in the field with a May bout with Hughie Fury, the cousin of Tyson Fury.

Bulgaria Kubrat Pulev (24-1), whose only loss came against Klitschko, will face journeyman Kevin Johnson on April 28.