LOS ANGELES >> All season long, the Birmingham basketball team has trusted its depth as much as its uptempo offense.Both were on full display Saturday in the LA City Section Open Division semifinals as the Patriots survived a 80-73 win over Taft at... 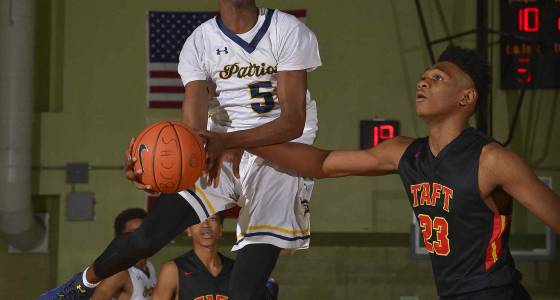 LOS ANGELES >> All season long, the Birmingham basketball team has trusted its depth as much as its uptempo offense.

Both were on full display Saturday in the LA City Section Open Division semifinals as the Patriots survived a 80-73 win over Taft at Roybal to reach its first LA City Section upper-division championship game.

Not only did Birmingham top Taft for the fourth time this season, the Patriots did so on a night where Devante Doutrive only made three field goals and fellow senior Mark Boland did not make a 3-pointer.

“Everyone’s taken their turn struggling at times this year and yet we’re still winning games,” Birmingham coach Nicholas Halic said, “We got five guys that are solid and do their job.”

Doutrive, who struggled with first half foul trouble, finished with 15 points, eight on free throws, while setting up his teammates for better shots. Boland had eight points and six rebounds, four on the offensive end. Devonnaire Doutrive and Deschon Winston picked up the scoring slack with 23 and 20 points, respectively.

Taft rallied to get within 65-57 in the fourth quarter after trailing by 17 but Birmingham made 14 free throws in the period to stay ahead and face defending Open Division champion Westchester on Saturday at Cal State Dominguez Hills at 7:30 p.m.

“That’s what you play for, to play against best,” Halic said. “Westchester’s historically been one of the best teams in the state so we know what we’re up against,”

Antwan January helped bring Taft back as he scored all of his 23 points after halftime. Taft led 18-12 at one point in the first quarter before Birmingham went on a 19-4 run as January and Skye Sabbah went to the bench for Taft with three first half fouls.

“You’re not shocked by their speed and advantages anymore,” Taft coach Derrick Taylor said of facing Birmingham a fourth time, “You just have to execute.”

“We know they’re a great team and they’re going to be a much different team than last time,” Winston said.