Antonio Brown did his buddy Odell Beckham Jr. a solid on Monday: He provided a rough outline of the millions awaiting him.Steelers for life #Boomin pic.twitter.com/LYcCi4fW8UThe Steelers agreed to a four-year extension with the star wide receiver with $68... 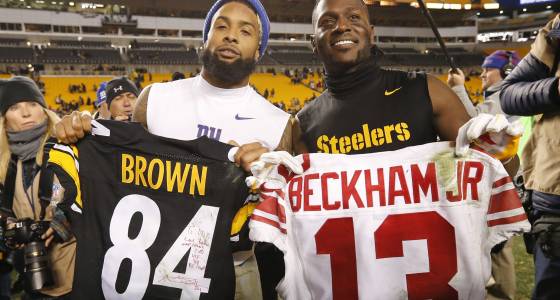 Antonio Brown did his buddy Odell Beckham Jr. a solid on Monday: He provided a rough outline of the millions awaiting him.

The Steelers agreed to a four-year extension with the star wide receiver with $68 million in new money, $17 million per year over four seasons from 2018-2021, according to ESPN. Brown will make $4.71 million in the final year of a six-year, $43 million contract, and after this year he’ll begin seeing an additional zero on his paychecks.

It makes Brown, who caught 12 TDs and amassed 1,284 receiving yards last year, the highest-paid wide receiver in football. And it makes Beckham, making about $1.8 million next year, take notice as he ventures toward free agency as soon as after the 2018 season.

The Giants’ 24-year-old superstar, coming off another record-setting season (that ended with a nosedive after a controversial trip to Miami), now has a contract precedent. If the Giants want to hold onto the face of their franchise, there’s now an outline for how much it will cost.