With the 2017 NFL Scouting Combine upon us, Bucky Brooks is ranking the top prospects at key positions. Today's focus: receiver.Pro comparison: Dez Bryant.Strengths: Prototypical WR1 with the size, strength and ball skills to dominate on the perimeter. Williams... 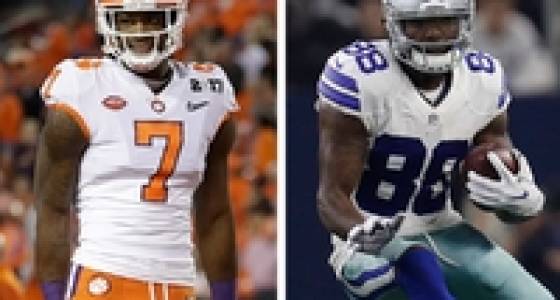 With the 2017 NFL Scouting Combine upon us, Bucky Brooks is ranking the top prospects at key positions. Today's focus: receiver.

Strengths: Prototypical WR1 with the size, strength and ball skills to dominate on the perimeter. Williams overpowers defenders with his "bully ball" game, and opponents are forced to double-team him to slow him. As a playmaker, Williams is at his best running isolation routes (slants, skinny post and fade) against defensive backs on the outside. The big-bodied pass catcher (6-foot-3, 225 pounds) uses his strength and power to win at the line and "box out" defenders at the catch point. With Williams also displaying exceptional ball skills in traffic, NFL quarterbacks will quickly learn to lean on the "big" WR1 in critical situations, particularly on third down or in the red zone.

Weaknesses: Scouts question whether Williams is fast enough to separate from coverage at the next level. Although his game revolves around his ability to "bully" defenders with his size and strength, Williams must be able to create consistent separation from defenders to thrive as a WR1. If he fails to run the 40-yard dash in the 4.50-second to 4.59-second range during his workouts, scouts will have a tough time believing he is fast enough to thrive as a pro.

Strengths: Electric playmaker with speed to burn and a polished overall game. Ross is a rare find at the position as a deep-ball specialist with precise route-running skills on short and intermediate routes. He can run every route in the book with a variety of stems and releases that keep defenders on their heels. Ross' precision and explosiveness are unrivaled at the position, which will make him a hot commodity for teams that covet route runners on the perimeter. As a pass catcher, Ross displays Willie Mays-like ball skills running under deep balls. He displays excellent balance, body control and agility on over-the-shoulder catches, particularly on fades down the boundary. Considering how many targets he could command as a big-play specialist in a vertical passing game, Ross' speed, quickness and ball skills could make him a star from Day 1.

Weaknesses: Despite the success of Antonio Brown and T.Y. Hilton as "small" WR1s, the league is still dominated by bigger receivers on the perimeter. Ross' small frame (5-foot-11, 190 pounds) could hinder his ability to win consistently against bigger defensive backs intent on employing "mug" tactics at the line of scrimmage. In addition, Ross' slender build could make it tough for him to do the dirty work between the hashes. At Washington, he operated extensively outside the numbers, and his limited exposure to "dirty work" routes (slants, digs and deep crossers) could raise a red flag from evaluators looking for a "chain mover" at the position.

Strengths: Smooth WR1 with polished route-running skills and exceptional pass-catching ability. Davis is a "get open" specialist with a knack for creating space from defenders at the top of his routes. As a route runner, he shows exceptional timing, patience and body control working defenders with a variety of releases and stems. Yet, he also displays the strength and power to "bully" smaller defensive backs on the perimeter. As a result, Davis beats defenders like a drum and anchored the Broncos' passing game as a WR1. The Western Michigan standout is one of the best pass-catchers in the draft, exhibiting strong hands and acrobatic footwork on circus catches along the boundary. He has not only mastered the "toe tap" but flashed a "dead leg" to secure catches in the back of the end zone. Davis' ballerina-like footwork is uncommon for a bigger receiver.

Weaknesses: Despite his dominance as a pass catcher, there are some concerns about his ability to separate at the next level. Scouts question whether he has enough speed to blow past elite defenders. In addition, skeptics view Davis as a small-school standout who racked up gaudy production against inferior competition. They point to his pedestrian games against Big Ten competition (see: Northwestern and Wisconsin in 2016 and Ohio State in 2015) as red flags on his resume.

Strengths: Rugged pass catcher with a physical game that overwhelms defenders on the perimeter. Smith-Schuster is a classic "chain mover" at the position with a playing style ideally suited for doing the dirty work between the hashes. He is at his best running slants, short crossers and dig routes, but he also flashes effective route-running skills on fades along the boundary. Although he doesn't consistently separate from defenders, Smith-Schuster uses his size, strength and ball skills to come down with 50-50 balls. With quarterbacks prone to like big-bodied receivers with the potential to expand the strike zone, the USC standout could play a key role as a "security blanket" in the passing game.

Weaknesses: Smith-Schuster's lack of speed and explosiveness could be a problem at the next level. Although he has shown that he can win on sheer toughness and physicality, he will have a tough time winning the majority of his battles without a speed advantage over his opponent. Smith-Schuster's unrefined route-running skills are also problematic for a receiver with a speed deficiency. He needs to add more wiggle and deception to the tops of his routes to keep defenders from squatting on him at the sticks. Without the speed to threaten defenders down the field, Smith-Schuster will need to use every trick in the book to consistently win against elite corners in one-on-one matchups.

Strengths: Explosive playmaker with a pro-ready game that's built on route running and electric running skills. Westbrook is like lightning in a bottle on the perimeter; few defensive backs can keep him in front of the defense. As a route runner, he shows exceptional poise and polish while deceiving defenders with a variety of different stems at the tops of his routes. From stutter-steps to hard head-and-shoulder fakes, Westbrook routinely rocks defenders to sleep before exploding out of his breaks. He is so good at creating separation that it's hard to imagine a slot corner staying in his hip pocket on option routes. As a pass catcher, Westbrook flashes strong hands and superb ball skills. He easily tracks and adjusts to balls, particularly over-the-shoulder throws down the field. Westbrook tracks the ball like an MLB centerfielder, exhibiting exceptional range and hand-eye coordination on each snag.

Weaknesses: Westbrook's slender build leads to serious questions about his strength, power and durability. Skinny receivers have a tough time withstanding the pounding that comes with being a WR1/WR2. Not to mention, it is hard to find a slender receiver willing to do the dirty work between the hashes. Although Westbrook has been effective catching the ball all over the field, there are some legitimate durability questions that must be addressed by the 176-pound pass catcher before teams will become comfortable with the idea of the Oklahoma star playing a key role in the passing game as a potential starter. Westbrook must also address some character concerns, given the two separate reported domestic violence arrests (the district attorney reportedly rejected the charges in the first, while charges were dismissed in the second) from 2012 and '13 that came to light last December.