The son of legendary boxer Muhammad Ali was detained for about four hours by immigration officials earlier this month at Fort Lauderdale–Hollywood International Airport, Florida, and continuously asked about his religion, according to a family... 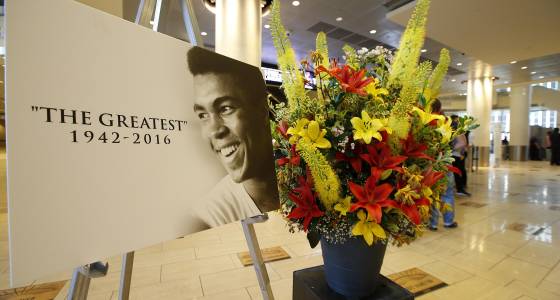 The son of legendary boxer Muhammad Ali was detained for about four hours by immigration officials earlier this month at Fort Lauderdale–Hollywood International Airport, Florida, and continuously asked about his religion, according to a family friend and lawyer Chris Mancini.

Muhammad Ali Jr., 44, and his mother, Khalilah Camacho-Ali, the first wife of Muhammad Ali, were returning after speaking at a Black History Month event in Montego Bay, Jamaica. They arrived at Fort Lauderdale-Hollywood International Airport on Feb. 7. Mancini told the Courier-Journal that they were pulled aside while passing through customs because their names sounded Arabic. Camancho-Ali was released after she provided the immigration officials with a photo of herself with her ex-husband. However, the officials questioned Ali Jr. for more than two hours and went on asking him, "Where did you get your name from?" and "Are you Muslim?"

Even after Ali Jr. acknowledged that he was a Muslim and was born in Philadelphia and showed his American passport, the officers kept on harassing him and asking him questions about his religion, Mancini said.

"Imagine walking into an airport and being asked about your religion," Mancini said. "This is classic customs profiling."

His detention was also condemned by common people on social media.

Mancini said that he has been trying to find out how many other people have been subjected to a similar treatment and that the family has been considering filing a lawsuit.

Mancini told the Courier-Journal, while referring to President Donald Trump's executive order last month, "To the Ali family, it's crystal clear that this is directly linked to Trump's efforts to ban Muslims from the United States."

Trump's executive order signed Jan. 27 imposed a 120-day suspension on the refugee program and temporarily banned citizens of seven Muslim-majority countries from entering the U.S. The ban is currently on hold as a federal judge ruled it was illegal, but it appears that people are still facing problems. Just this week, several passengers flying domestically from San Francisco to John F. Kennedy International Airport were asked to produce their IDs upon landing in New York.