The story of Grassy Narrows in Ontario is like something ripped from a Hollywood blockbuster. But it’s not just a story. It’s real life. Health studies by Japanese experts have concluded that 90 per cent of people tested in Grassy Narrows First... 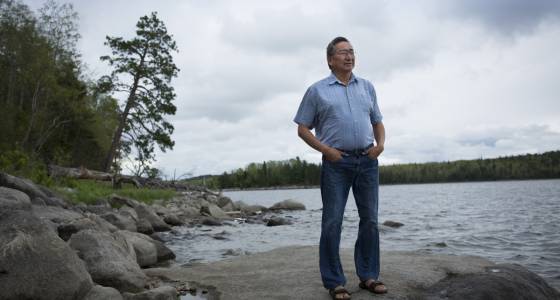 The story of Grassy Narrows in Ontario is like something ripped from a Hollywood blockbuster. But it’s not just a story. It’s real life. Health studies by Japanese experts have concluded that 90 per cent of people tested in Grassy Narrows First Nation and nearby Wabaseemoong (Whitedog) Independent Nations have symptoms of mercury poisoning, including numbness in fingertips and lips, loss of coordination, trembling and other terrible neuromuscular conditions. Many children suffer from mercury-related developmental problems, which continue into adulthood.

On Feb. 13, the provincial government announced it will clean up the English-Wabigoon watershed in northwestern Ontario of toxic mercury pollution, which has wreaked havoc on First Nations communities in the region. Grassy Narrows and Wabaseemoong are downstream from one of the worst toxic sites in Canada — the former Reed Paper mill in Dryden, Ont.

In the 1960s, the company dumped more than 9,000 kilograms of untreated mercury waste into the Wabigoon River. Though the mill (under new ownership) has long since stopped using mercury, evidence indicates the toxic chemical may be leaching into the river from the former industrial site. Soil samples collected behind the mill by Toronto Star reporters and volunteers with the environmental organization Earthroots found mercury at 80 times normal levels. Their findings appear to corroborate a former mill employee’s claims that he was ordered to bury barrels of salt and mercury on the site in the 1970s.

Unlike the dramatic resolution to a cinematic potboiler, the Ontario government’s decision to finally address the ecological crisis at Grassy Narrows didn’t rest on the actions of an outside environmental hero, single-handedly battling an uncaring government or rapacious corporation.

Far from it. The hopeful resolution to Grassy Narrows’ nightmare is thanks to the people of Grassy Narrows themselves: elders, hunters and trappers, fishers, mothers and youth who have campaigned tirelessly for decades to get environmental toxins cleaned from the river, so they can once again eat its fish and practice their culture without fear of getting sick.

Among them are grassroots leaders such as Judy Da Silva, a soft-spoken survivor of Minamata disease, which is caused by acute mercury poisoning. Since 2010, she’s led the River Run to Queen’s Park every two years, in which survivors, many in wheelchairs, and their supporters march through the streets of Toronto to draw attention to the mercury contamination of Grassy Narrows.

When the media asked what she thought of the government’s commitment to clean the river, Da Silva emphasized the sacrifice of the many community members who got sick and died during the long fight for justice, including “the old hunters and trappers that suffered and who didn’t see the commitment today. Seeing them pass away was really hard.”

The people of Grassy Narrows have fought for more than 40 years to hear an Ontario premier commit to clean their river. Now, the government needs to follow up with concrete action. It must work with the community to develop a remediation plan that details what actions will be taken to remove mercury from the watershed. This plan must be adequately funded and remediation must begin quickly. Scientists advising the community have told the premier that watershed remediation can be done safely, effectively and affordably.

We recently accompanied Grassy Narrows Chief Simon Fobister Sr. to meet with the premier and were encouraged by her personal sense of urgency and willingness to be guided by the best available science to ensure the cleanup succeeds.

American poet Gary Snyder has been quoted as saying, “The most radical thing you can do is stay home.” The phrase has come to have many associations, most notably to describe a sense of place and the profound power of communities coming together to protect it.

Snyder’s poetic description is an appropriate portrayal of the tenacious efforts of the people of Grassy Narrows to clean up their river and ensure people in their community are healthy for generations to come.

The word “radical” originates with the Latin for “root” or “having roots.” Grassy Narrows’ presence on their river is ancient and deeply rooted. Despite the enormous threat to their health from exposure to mercury in their water and fish, they never abandoned their home or their belief in its recovery.