Let's 'ILexit' — for the good of America

In case you haven't heard, a fringe group of California progressives is agitating for the Golden State to secede from the Union in the wake of Donald Trump's election. They're collecting signatures to put the question of "Calexit" to voters on... 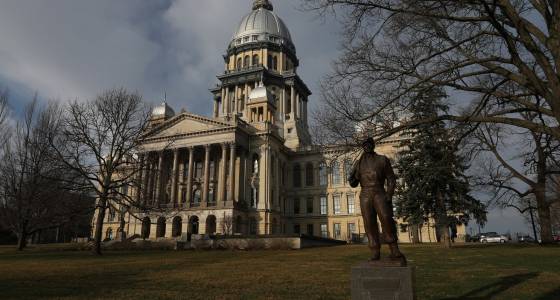 In case you haven't heard, a fringe group of California progressives is agitating for the Golden State to secede from the Union in the wake of Donald Trump's election. They're collecting signatures to put the question of "Calexit" to voters on the next statewide ballot.

California ultimately won't leave the country — nor should it. Yes, it's incredibly far to the left culturally and politically, chock-full of self-important, politically correct bureaucrats and arrogant Hollywood elites. But it's also home to a massive economy driven by cutting-edge entrepreneurship, great food, great weather and some of Mother Nature's finest masterpieces.

I grew up in the West, just south of Seattle, and while those of us in Washington state always had a bit of an inferiority complex regarding California in those days, I'd personally hate to see her go.

Illinois is a different story. I've spent most of my adult life here; for more than 25 years I've called Chicagoland home. I started a business and raised my family here. But the more I've watched the city of Chicago and the state flail about in the past few years, unable to protect its citizens and unwilling to put its fiscal house in order, the more convinced I've become that maybe it's time for Illinois to leave the Union — as a favor to the rest of America.

I'm joking about "ILexit," but less than you might think.

In the city of Chicago, the carnage — and, yes, I use that Trumpian phrase on purpose — continues unabated. Seven people were shot dead on Wednesday, including a pregnant woman in her 20s, making it the deadliest single day in the city since eight people were killed on Christmas. So far this year, homicides are outpacing last year's obscene total of 763, the highest number of homicides the city has seen since 1996.

Decades of mismanagement, lavish spending programs and kowtowing to public employee unions have left the city's finances in shambles. Taxes and fees in the city are skyrocketing, while its bond status has been reduced to junk. Despite all this, voters have continued to reward just one party with power. Democrats have run the city of Chicago since before Franklin Roosevelt was president.

Outside of Chicago, things are no better, even if they're a bit more bipartisan. Of Illinois' last four governors, two (Republican George Ryan and Democrat Rod Blagojevich) went to prison. (Two other governors of the last half-century, Otto Kerner and Dan Walker, both Democrats, also spent time in the slammer.)

In Springfield, Speaker of the House Michael Madigan, another Chicago Democrat, has ruled the state legislature with an iron fist for 32 of the past 34 years. During his tenure, Illinois has gone from the Midwest's economic powerhouse all the way to the poorhouse. Illinois currently has a backlog of $11.9 billion in unpaid bills and roughly $130 billion in unfunded pension liabilities — the worst of any state in America. A Moody's report issued in early January characterized Illinois as "one of the Midwest's weakest links, reflecting both soft job creation and the state's descent into fiscal quicksand."

Let's face it, Illinois currently has only two things going for it: the Cubs, and the possibility that global warming has made the winters bearable. Beyond that, decades of dysfunctional government, public apathy and lack of accountability have trapped the state in a death spiral.

So maybe it's time to pull the plug with "ILexit" — for the good of the rest of the country. Nothing will change for Illinois, of course. We still will exist as a corrupt, debtor nation, surrounded by and dependent on better managed, more productive neighbors. A Greece of the American heartland. Wrigley Field will be our Acropolis.

Sure, "ILexit" is just as crazy as "Calexit" — and with just as much chance of success. Then again, that same Moody's report from January highlighted the fact that because of the state's lackluster economy and high taxes, Illinois has suffered a massive outmigration in the past year. More than 115,000 people have fled, with about half of those not heading to far-flung tax havens in sunnier climes, but to states right next door. In other words, "ILexit" is already happening, like it or not.

Tom Bevan is the co-founder and publisher of RealClearPolitics and co-author of "Election 2012: A Time for Choosing."

Doubting Rauner? We understand. Here's a reminder. Plus a Senate Pass/Fail.

Illinois loses more residents in 2016 than any other state

A wake-up call for Illinois

Wake up, Illinois. You're surrounded.