Sara (Caity Lotz) and the rest of the team try to get the good Rip (Arthur Darvill) back in Season 2, episode 13 of “Legends of Tomorrow.” But will Sara let Rip become the captain again after everything that has happened to him?In a recent interview with... 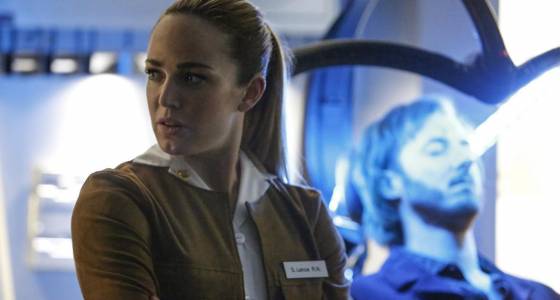 Sara (Caity Lotz) and the rest of the team try to get the good Rip (Arthur Darvill) back in Season 2, episode 13 of “Legends of Tomorrow.” But will Sara let Rip become the captain again after everything that has happened to him?

In a recent interview with Entertainment Weekly, Lotz said that Rip has done things to Sara that she didn’t deserved. And since Sara doesn’t forgive easily, it seems that Rip won’t be able to return to his role as a captain even when he’s back to his old self.

“In my head, Rip’s done a lot of things to Sara that she didn’t like and didn’t appreciate,” Lotz told the news outlet. “She has a love-hate with him relationship already. She loves him, but she hates him and that’s kind of a hard thing to forgive. Sara’s not a saint.”

During a Facebook Live Q&A with fans in December, Lotz said that she has no idea if Rip is going to be the captain of the team again once he’s reunited with them. The actress, however, admitted that she sometimes misses the old version of Sara who doesn’t have that much responsibility.

“I don’t know actually,” Lotz said when asked who the captain will be when Rip returns to the team. “It’s funny because the writers kind of keep us in the dark, so we don’t always know what’s going on until we get the scripts. I am interested to see what happens. I think it’s fun being the captain, but also I think it’s hard because Sara has to be more responsible and sometimes it’s fun when she [just] gets to go after the baddies.”

According to the synopsis for the next episode of “Legends of Tomorrow,” Rory (Dominic Purcell) suggests they enter Rip’s mind to awaken his good self back. But when they do, Sara and Jax (Franz Drameh) discover something unpleasant in Rip’s subconscious that leads them to fight evil versions of themselves.

“Legends of Tomorrow” Season 2, episode 13, titled “Land of the Lost,” airs on Tuesday, March 7 at 9 p.m. EST at The CW. Check out the trailer for the episode below:

“Legends of Tomorrow” star Caity Lotz thinks that Sara will have a hard time forgiving Rip (Arthur Darvill) for all the bad things he has done to her and to the rest of the team. Photo: The CW