Is The Press The Enemy? Top Dem Vows To Protect Journalists, Calls For Money For Public Broadcasting, Whistle Blower Protections

U.S. Sen. Dick Durbin Tuesday called President Donald Trump's attacks on the press "unprecedented" and dangerous to American Democracy at a broadcasters meeting in Washington.“The integrity of the news industry is under an unprecedented attack,” Durbin... 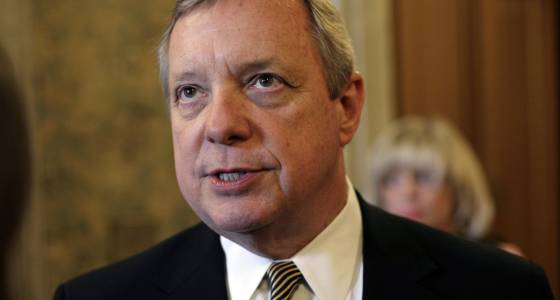 “The integrity of the news industry is under an unprecedented attack,” Durbin said at the National Association of Broadcasters’ State Leadership Conference. “These attacks aren’t just coming from outside our border or the Russian government. The attacks are coming from our own government.”

Durbin, R-Ill., was referring to President Donald Trump penchant for calling any unfavorable stories about him or his administration “fake news” and efforts to ban some news organizations from White House briefings and events. He listed instances in which Trump has called reporters “lying and dishonest.”

“His near-constant stream of invective towards the media is even more troubling when you consider that President Trump has had only praise for a dictator and former KGB official who ordered a cyber act of war against our nation, Russian President Vladimir Putin,” Durbin said.

He said Trump’s attacks are very different from criticism of the press offered by his predecessors.

“There’s a qualitative and quantitative difference in the criticism of press and sources from any president of either political party,” Durbin said. “The threats are very personal. Excluding reporters from the White House press conferences. This is much, much different.”

Echoing remarks made several weeks ago by Sen. John McCain, R-Ariz., Durbin likened Trump’s assertion that the media was an “enemy of the American people” to the tactics of dictators.

"The kinds of attacks on the media that we are seeing in America today would have seemed familiar 30 years ago in Ukraine or the Baltics, when those nations were still under Soviet occupation," he said. "And they would seem familiar today in authoritarian states like Russia, Venezuela, Cuba, Turkey or Hungary. Turning reporters into enemies — not just adversaries, but enemies — is a strategy that strongmen use to silence critics and maintain power.”

"Their goal is to discredit the messenger. That way, when there is bad news, or news that contradicts the official line, people won’t believe it.”

"Just because someone doesn’t like a story, doesn’t mean it’s libelous," he said.

Durbin urged Vice President Mike Pence to back a shield law that would protect reporters from having to reveal their sources.